The Sky Blues travel to the John Smith’s Stadium to take on Huddersfield Town on Saturday afternoon. Here’s everything you need to know about our opponents. 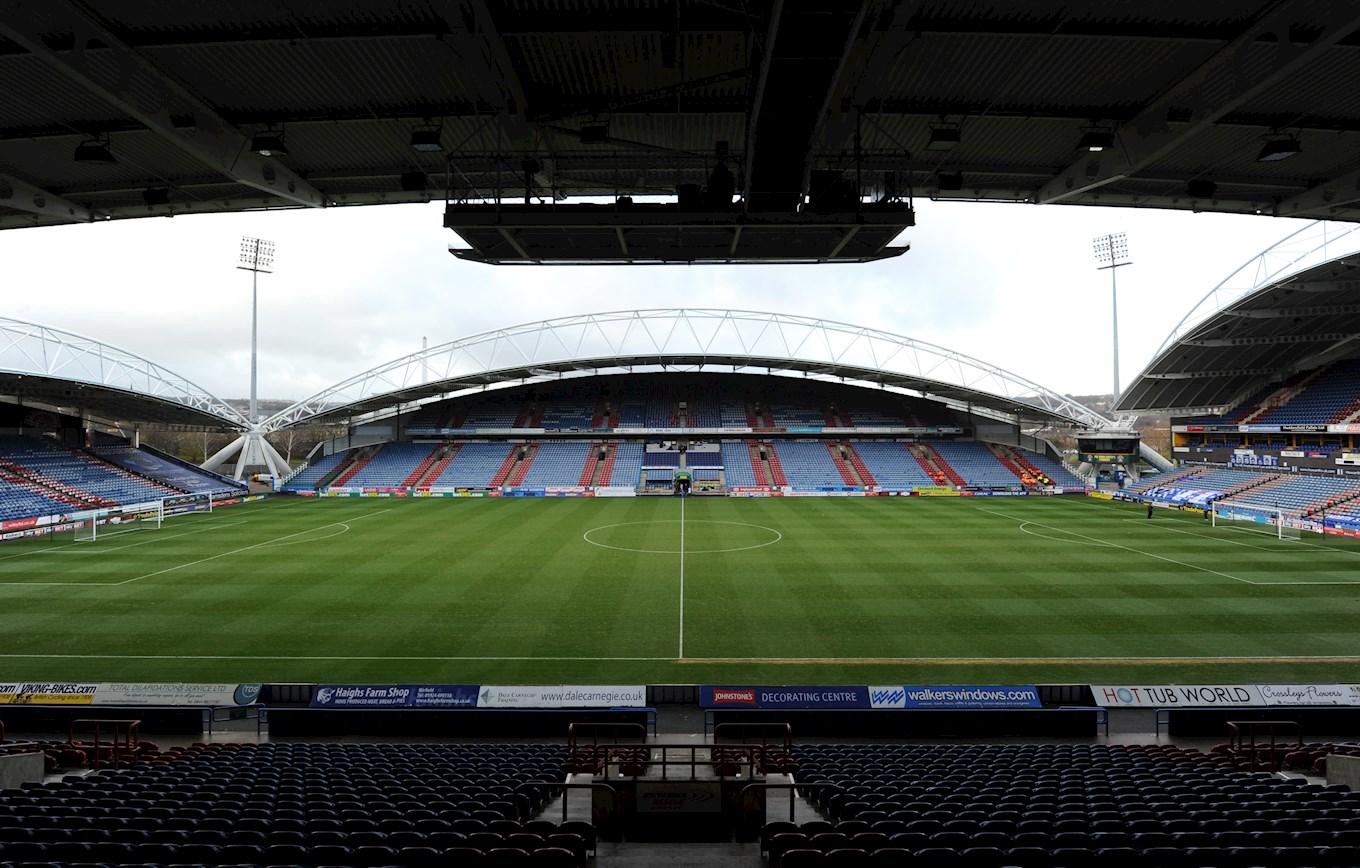 Huddersfield are currently 20th in the Sky Bet Championship table, eight points clear of safety and one place below the Sky Blues in the table.

The Terriers top scorers are Frazier Campbell and Josh Koroma who have both scored seven goals this season whilst Isaac Mbenza has provided seven assists as well as chipping in with five goals.

The West Yorkshire club have won just three of their last 22 games since the turn of the year and have secured their place in the second tier next season. 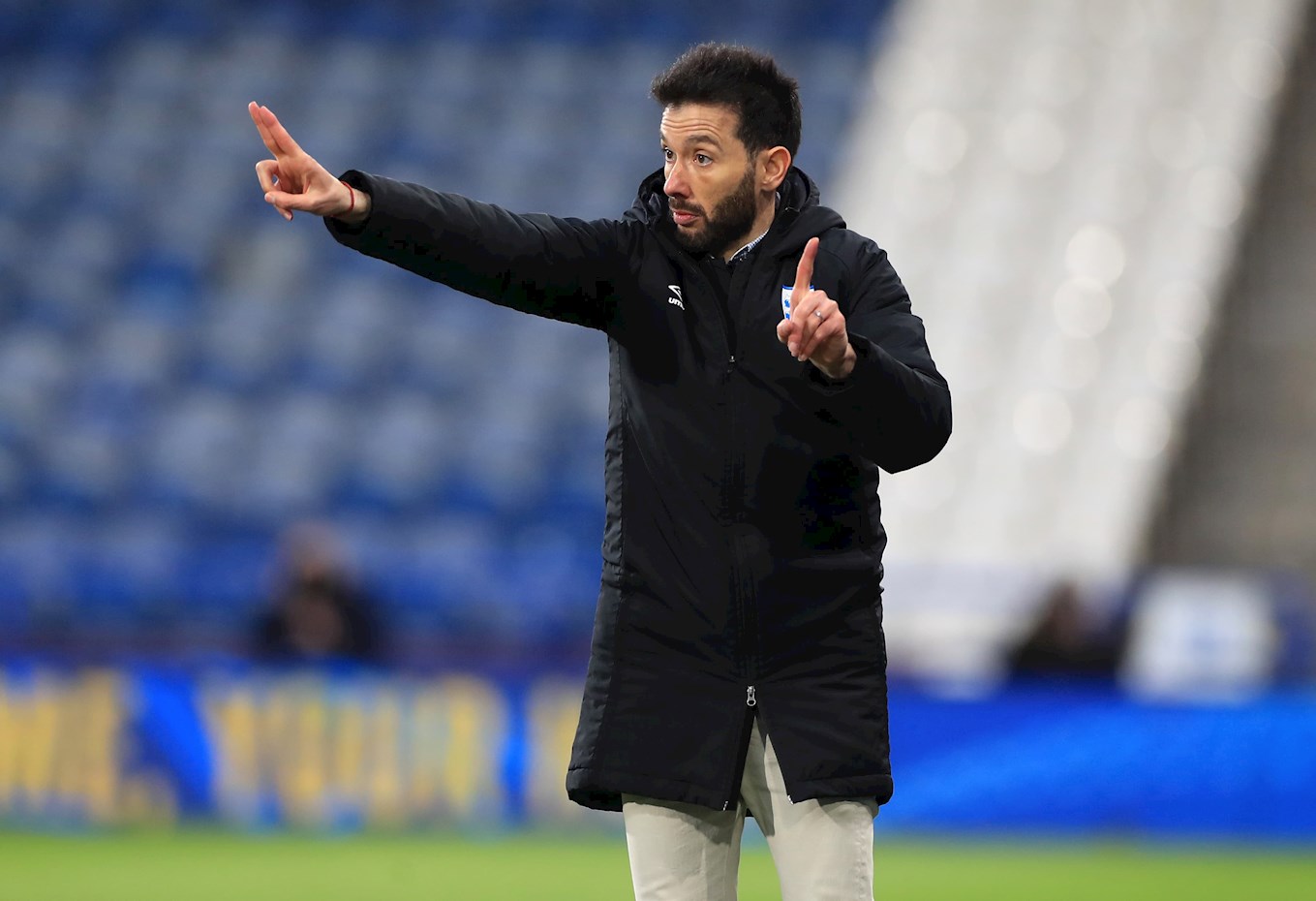 The 38-year-old began his managerial career in Cyprus and spent brief spells in charge of Doxa and Ermis Aradippou before becoming Leeds’s under-23 manager in June 2017. 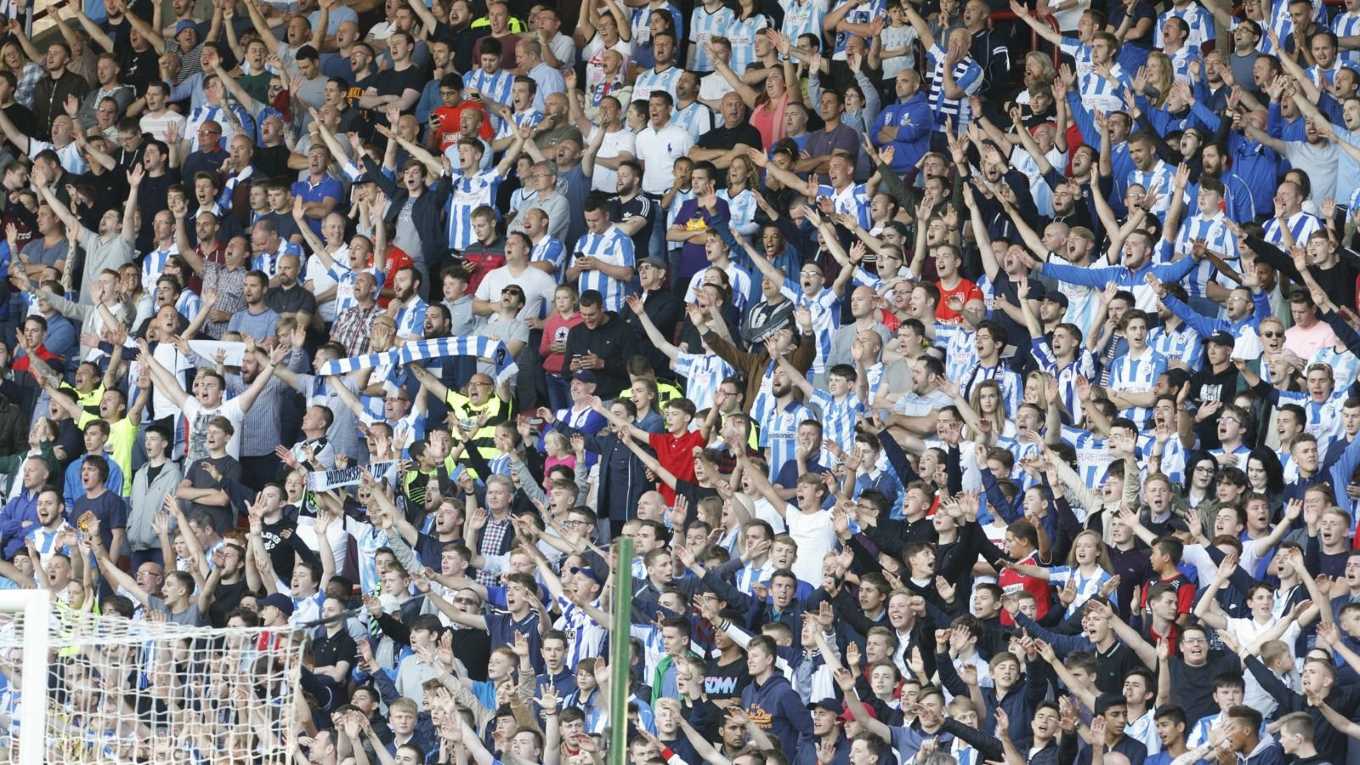 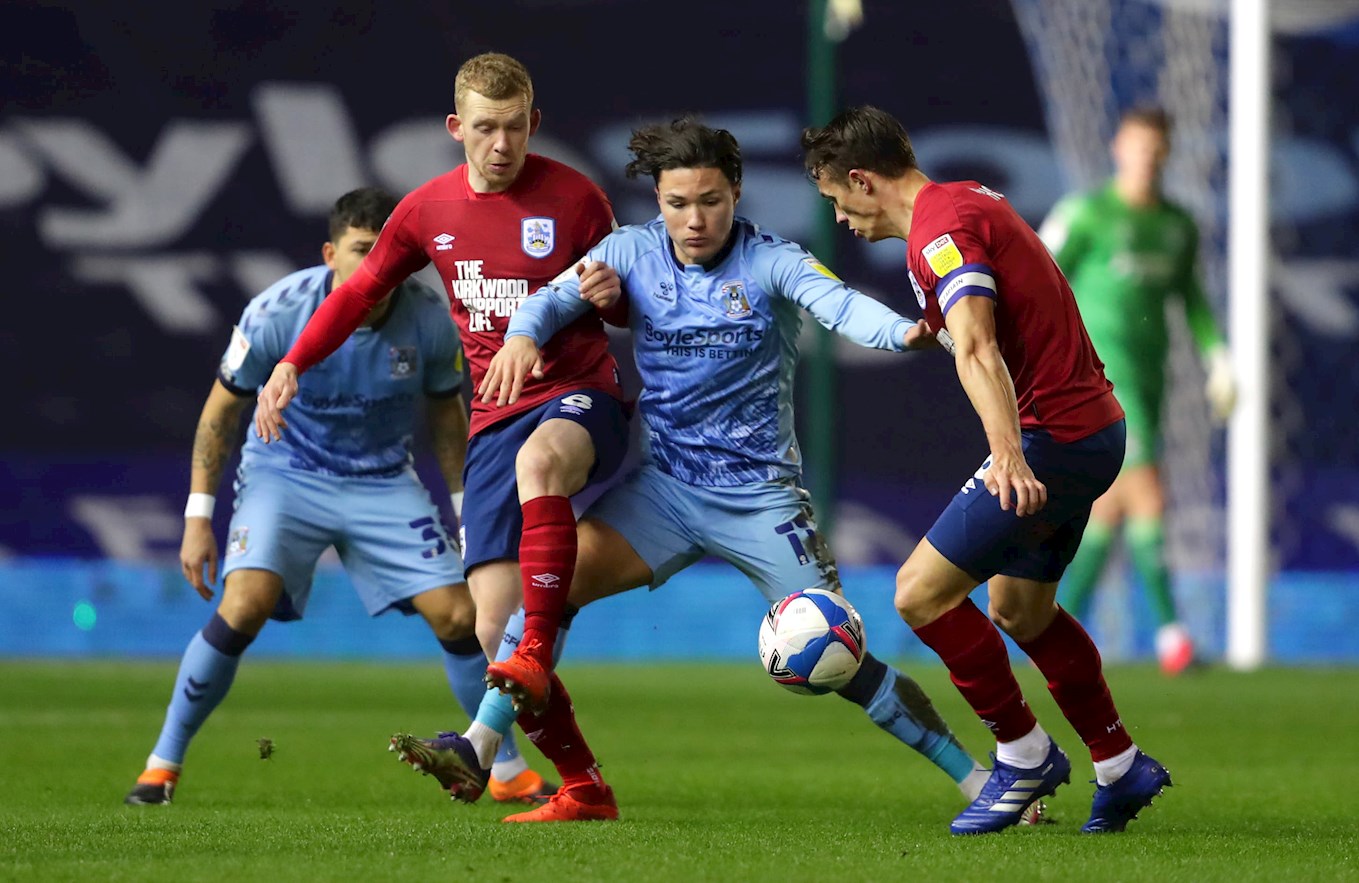 The two sides last met in December last year when the Sky Blues were held to a goalless draw at St Andrew’s in a game of few chances.

Gus Hamer’s early shot flew over the crossbar before Ben Wilson made an excellent save low down to his left to keep out Isaac Mbenza’s strike.

From the resulting corner, City produced a blistering counter attack which ended with Callum O’Hare playing in Hamer whose powerful effort went inches over the crossbar from the edge of the penalty area.

The visitors should have taken the lead when Mbenza broke clean through on goal before moving the ball beyond Wilson and somehow finding the side netting with the goal at his mercy.

Hamer and Allen were both denied by Terriers keeper Ryan Schofield before the ball somehow stayed out when Fankaty Dabo squared for Max Biamou in the middle with the ball rolling across the goal line before being cleared to safety.

The Terriers almost snatched a winner through Alex Pritchard who was denied by another fine save from Wilson as both teams were forced to settle for a point. 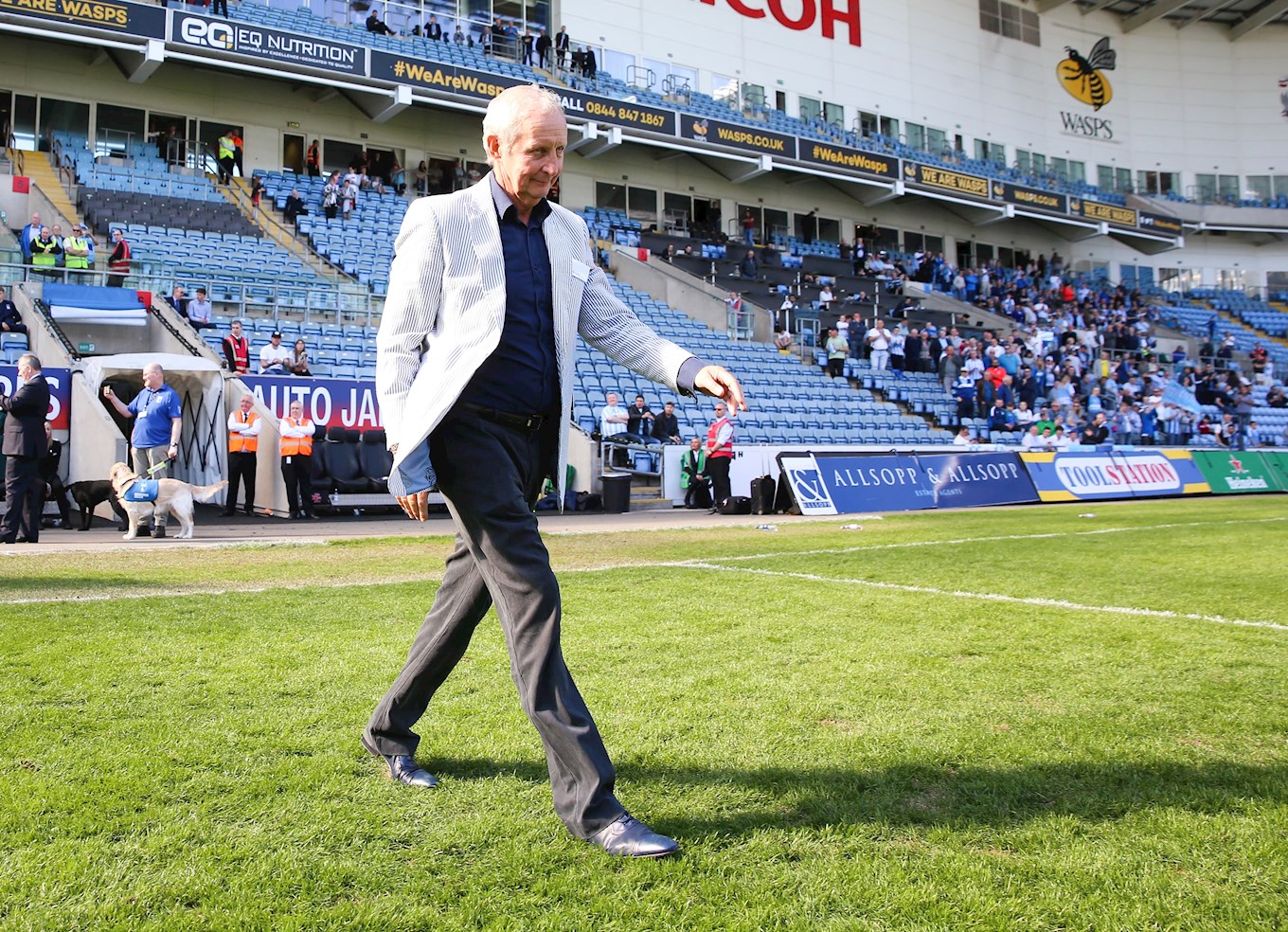 The Lancashire born defender began his career with the Terriers where he made 61 appearances scoring one goal before joining the Sky Blues in 1968.

During his eight years at Highfield Road he was part of the side that beat Bayern Munich in the European Fairs Cup, making an impressive 217 appearances in a City shirt.

He departed for Brighton & Hove Albion in 1976 where he would spend the next three seasons, scoring one goal in 95 appearances, before later becoming manager of the South Coast club. 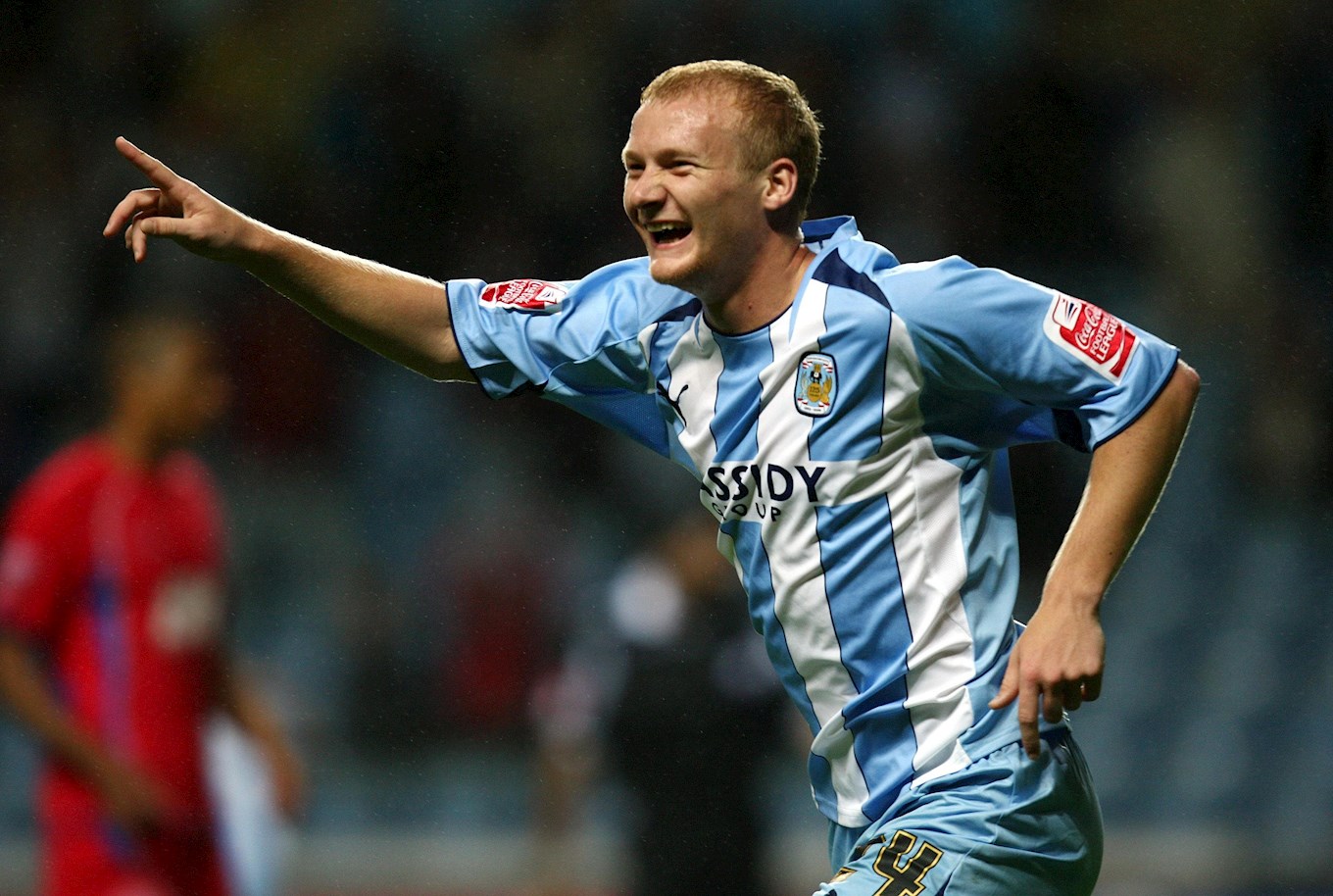 Current Chelmsford City player-manager Robbie Simpson spent two seasons with the Sky Blues before making the switch to the Terriers.

Simpson began his career with Cambridge City where he made over 100 appearances before completing a move to Cambridge United, impressing in his only season with the U’s.

He signed for the Sky Blues in June 2007 and scored on his debut in the League Cup, going on to score seven goals in 71 appearances during his two seasons with the club.

The forward joined Huddersfield in June 2009 but struggled with injuries during his first season with the club and was loaned to Brentford before being sold to Oldham Athletic having made just 16 appearances for the Terriers.

After two seasons with the Latics he spent one season with Leyton Orient before returning to Cambridge United in June 2014.

He then spent two seasons with Exeter City before achieving promotion out of League Two with Milton Keynes Dons during his sole season with the club.

Simpson joined his current employers in August 2019 before being appointed interim manager the following January and taking permanent charge of the National League South side in March of last year. 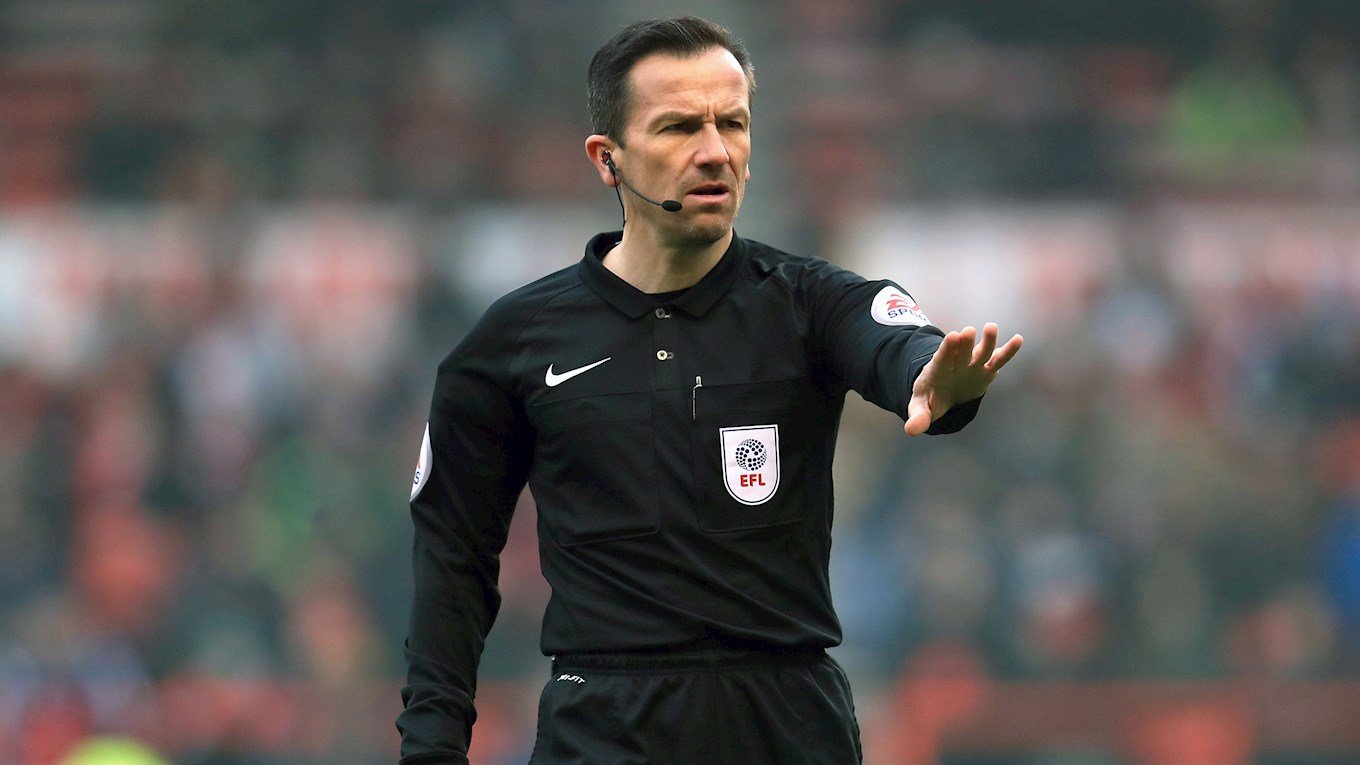 Keith Stroud will be the man in the middle on Saturday afternoon, taking charge of his 36th game of the 2020/21 season.

He last refereed the Sky Blues in December last year when City were beaten 2-0 by Preston North End at Deepdale.

This will be Stroud’s 17th season as a Football League referee and he has officiated the Sky Blues on 16 previous occasions, with City winning three, drawing four and losing nine of those matches.

He will be assisted by Jonathan Hunt and Sam Lewis with Michael Salisbury acting as fourth official.

The Sky Blues were held to a 1-1 draw by Huddersfield Town at the John Smith’s Stadium on Saturday afternoon.

Jordan Shipley came off the bench to put City ahead in the second half with a deflected strike before Danny Ward equalised late on as the Sky Blues extended their unbeaten away run to three matches.

City finish the season with a home game against Millwall next weekend and will look to climb further up the table and finish the campaign on a high.

Mark Robins made two changes from the side beaten by Preston North End last weekend with Fankaty Dabo and Tyler Walker replacing Julien Dacosta and Max Biamou in the starting line-up.

After a closely fought opening five minutes it was Huddersfield who had the first chance of the game when Duane Holmes found Yaya Sanogo towards the right-hand edge of the penalty area with the striker firing his effort harmlessly over the crossbar.

The hosts then broke into the box after a strong run down the left by Josh Koroma with Ben Wilson making a smart save low down to his right.

City then created their first opening of the afternoon after some good work between Matty James and Viktor Gyokeres on the edge of the penalty area allowed Callum O’Hare to curl an effort straight at Town keeper Ryan Schofield.

Former City man Richard Keogh then had a glorious chance to open the scoring when Sanogo’s deflected header fell into the defender’s path only to completely miscue his kick six-yards from goal.

The Terriers continued to test Wilson in the Sky Blues goal when Lewis O’Brien let fly from 25-yards out with the City keeper comfortably gathering the midfielder’s effort low down to his left.

City responded with a chance of their own when O’Hare drove into the penalty area before slicing an effort wide of the Huddersfield goal.

The Sky Blues had another shooting chance when a corner was cleared to the edge of the penalty area where the ball sat up invitingly for Dabo who skied an effort over the crossbar from distance.

Robins’ side arguably should have had a penalty in the final few moments of the half when Gyokeres effort from 20-yards out appeared to be blocked by the raised and outstretched arm of Keogh only for referee Keith Stroud to be unmoved.

City introduced Jordan Shipley at half-time in place of Walker and the midfielder almost made an immediate impact when he teed up Gyokeres whose low effort was tipped onto the left-hand post by Schofield.

The Sky Blues came close again minutes later when Gyokeres turned his man before beating a Huddersfield defender to a loose ball to open up some space in the penalty area only to fire an effort straight at Schofield.

An injury to Dabo just before the hour mark allowed Jack Burroughs the chance to make his first league appearance of the season off the bench.

City’s pressure eventually told when they took the lead on 69 minutes after winning the ball deep in the Terriers half thanks to an important challenge from Burroughs before Hamer played in Shipley whose deflected effort left Schofield with no chance.

Huddersfield equalised 10 minutes later when the Sky Blues failed to clear a corner from the left with the ball dropping to substitute Ward who drilled an effort into the bottom left corner.

The Sky Blues were on the front foot again almost immediately after the restart with Josh Eccles charging forward before forcing Schofield into a save low down to his left.

City pressed for a winner in the final minutes and almost found one when O’Hare’s goalbound effort from the edge of the penalty area was deflected behind for a corner but were forced to settle for a point despite a strong second half display. 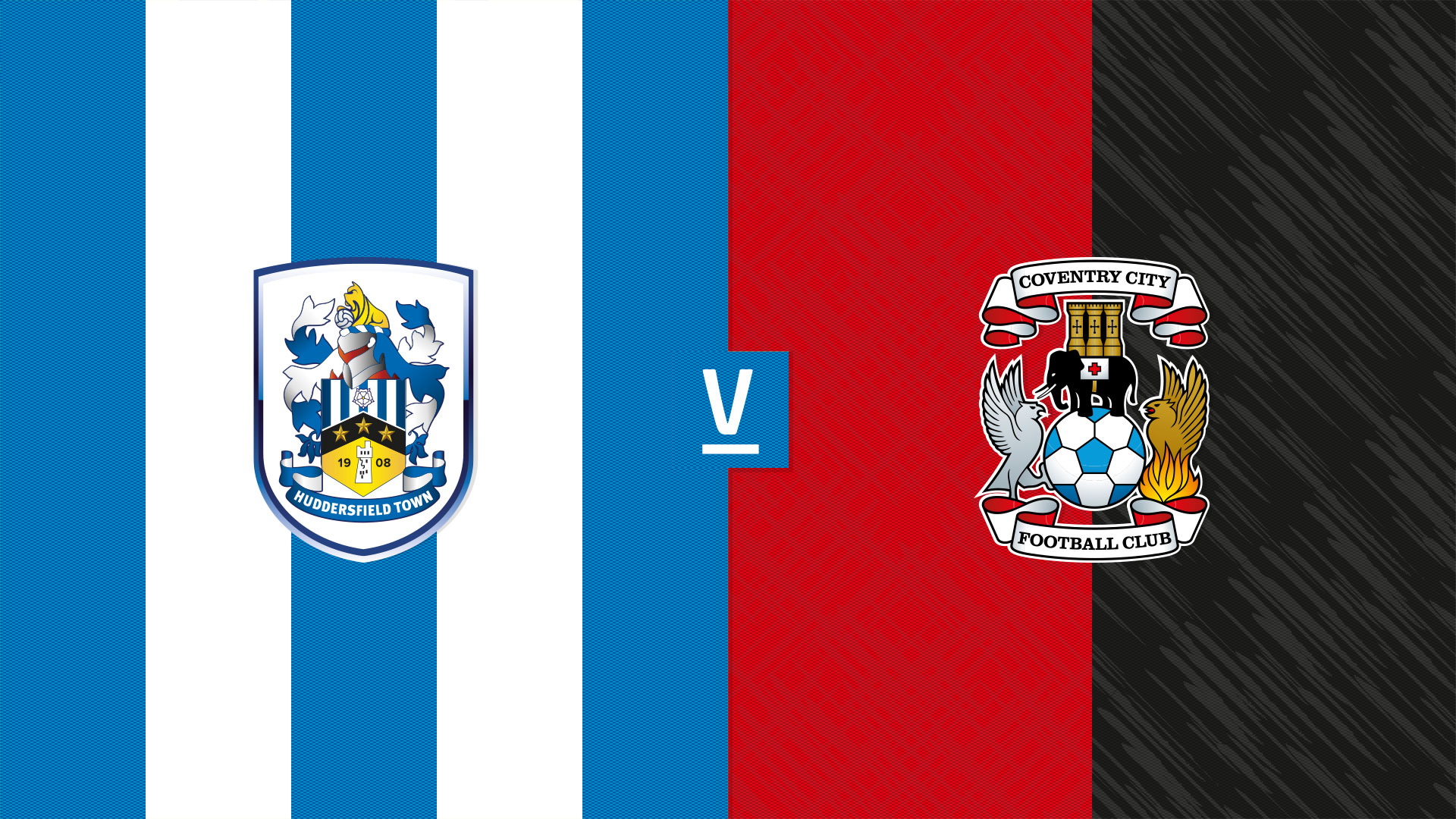 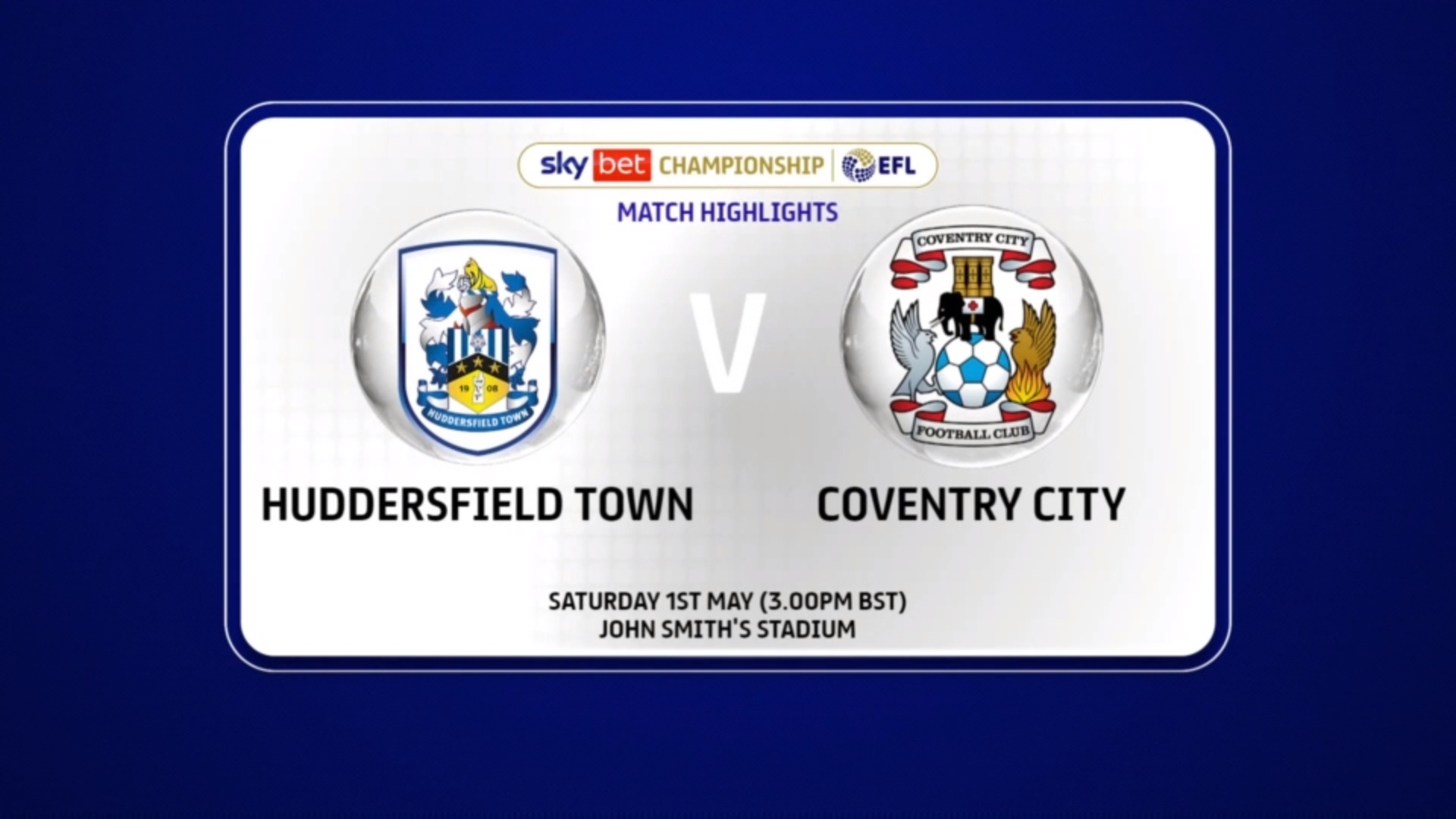 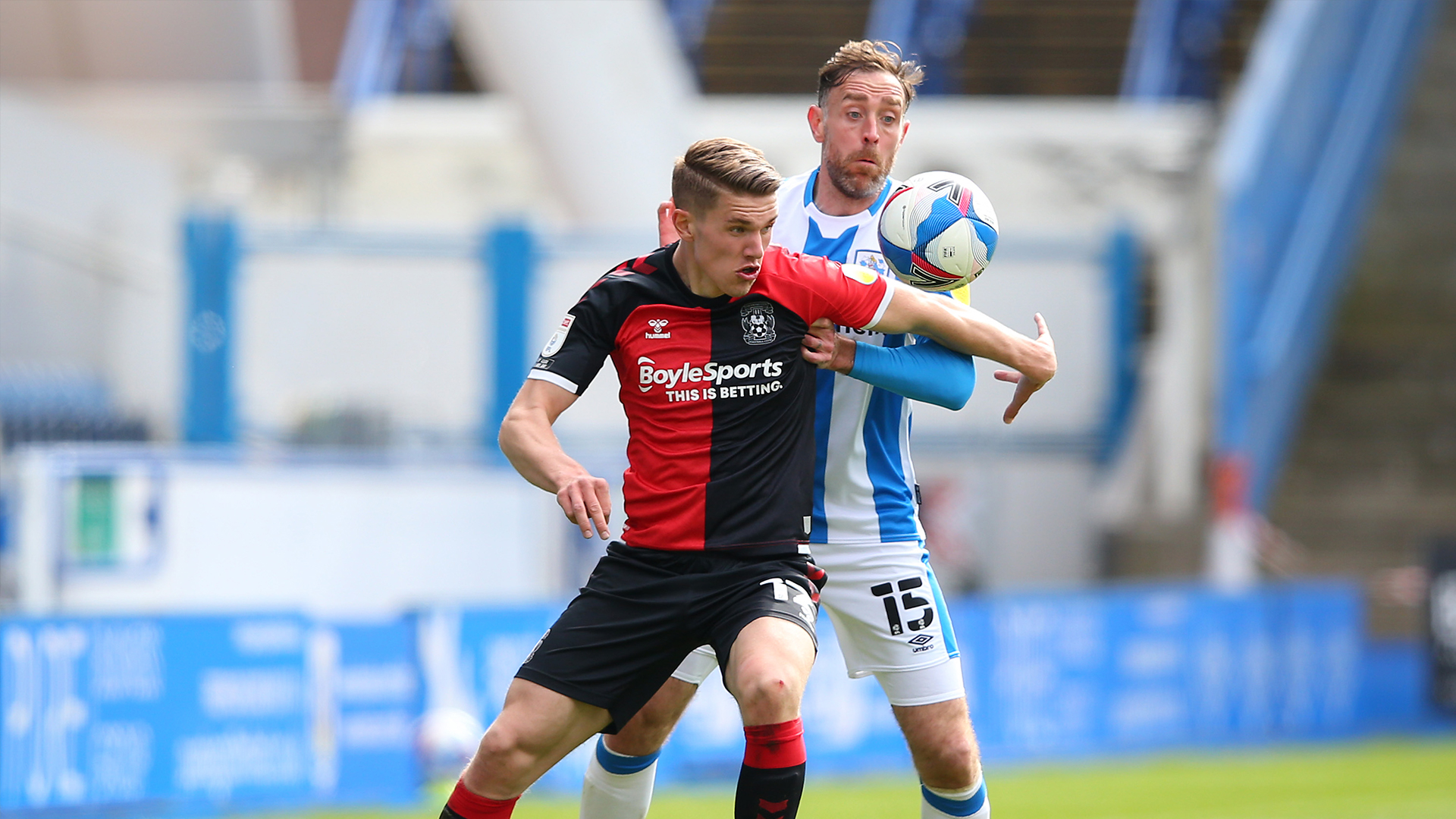