The Sky Blues travel to Ewood Park on Saturday afternoon to play Blackburn Rovers. Here’s everything you need to know about our opponents. 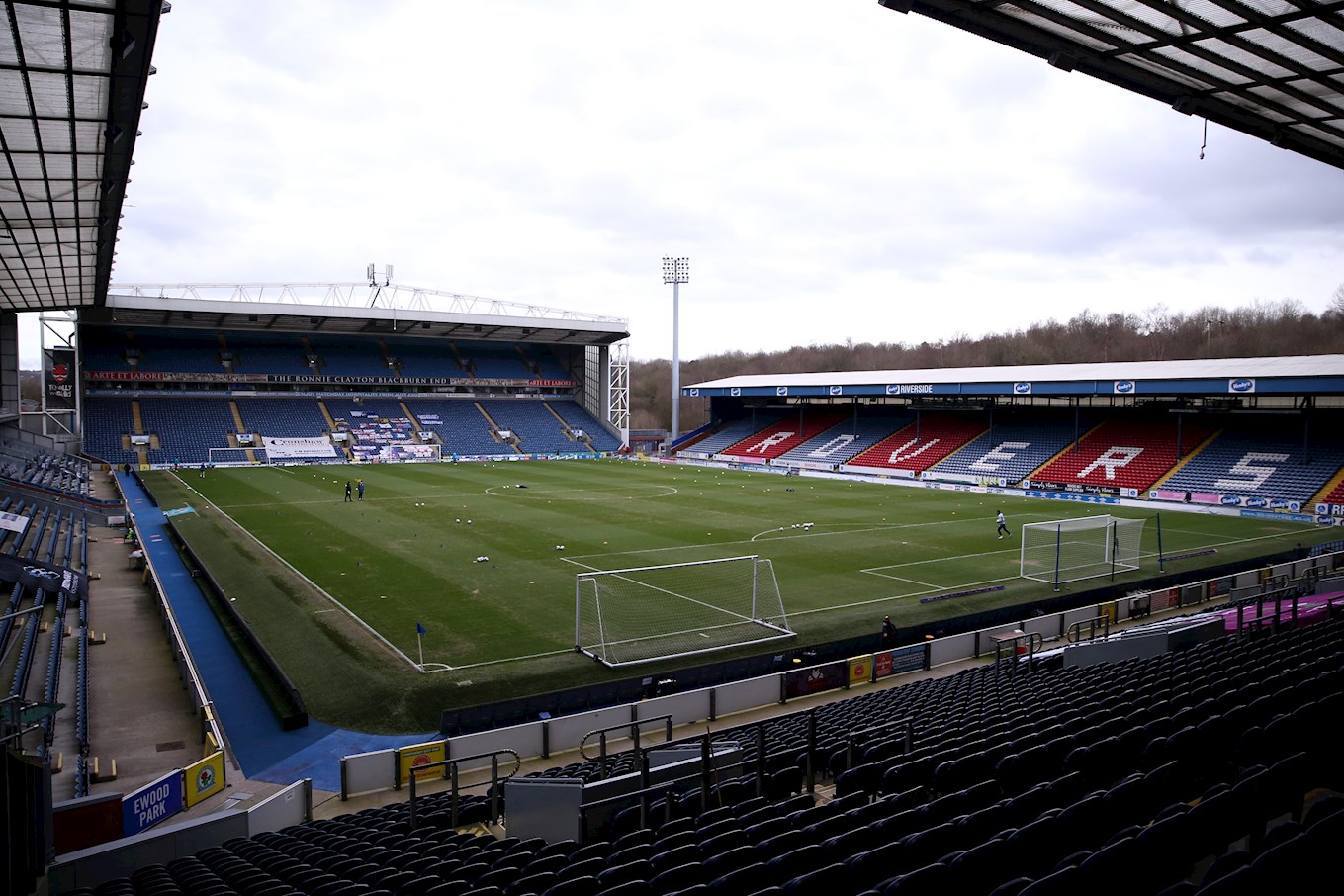 Blackburn are currently 15th in the Championship table and are managed by former Sky Blues boss Tony Mowbray.

Rovers top scorer is Adam Armstrong who has found the net on 20 occasions this season whilst on loan Liverpool winger Harvey Elliott has provided nine assists.

The Lancashire club have lost their last five league matches and are five points ahead of the Sky Blues in the table. 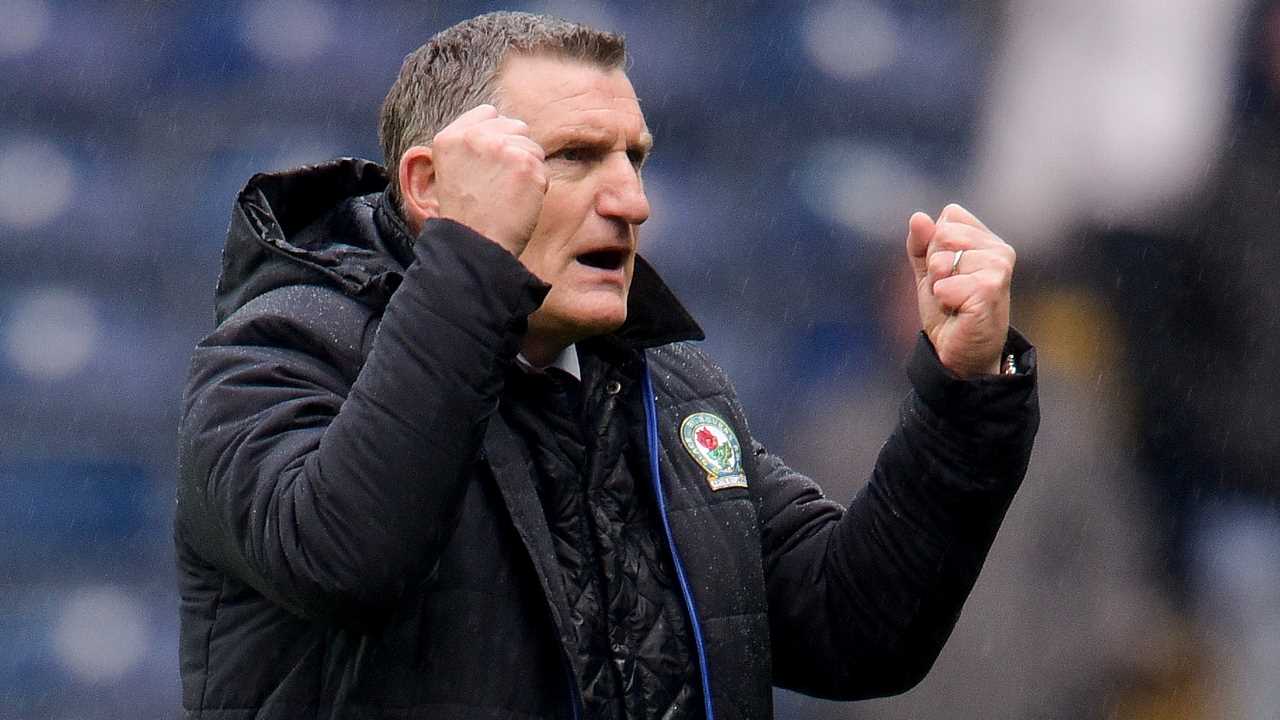 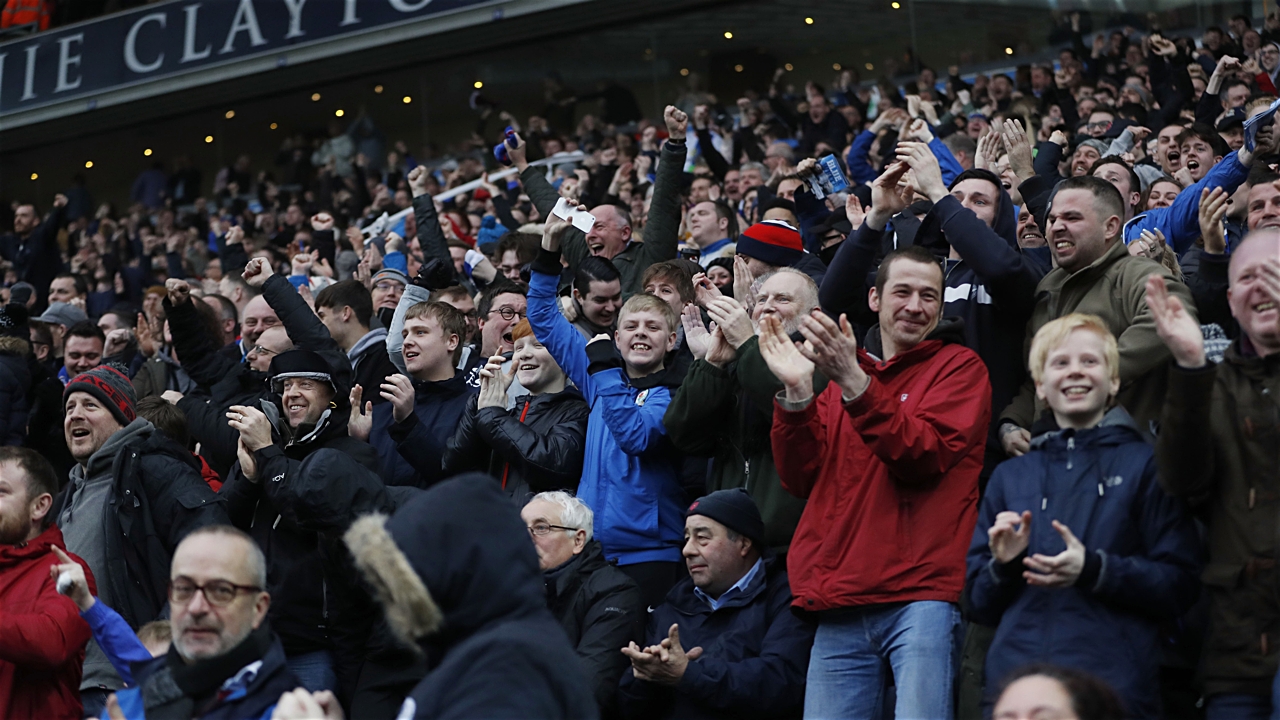 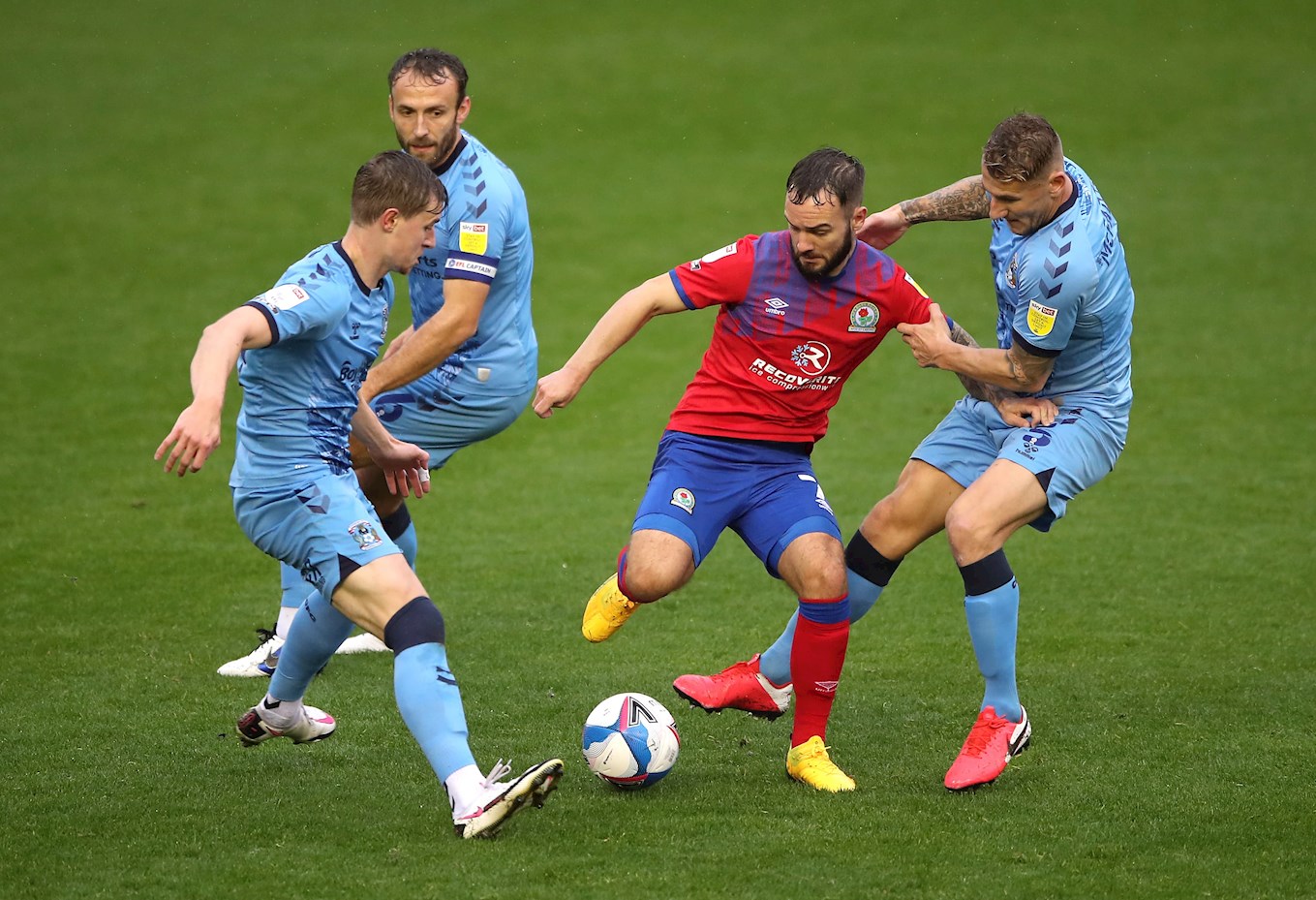 The two sides met in the Sky Bet Championship earlier this season when the Sky Blues suffered a heavy defeat at St Andrew’s after being reduced to 10-men early in the first half.

City hit the post in the opening exchanges when Ryan Giles broke away down the left-hand side before finding Matty Godden in the penalty area who smashed an effort against the woodwork.

The Sky Blues had Michael Rose sent off on 14 minutes when he pushed Ben Brereton over inside the penalty area with Adam Armstrong dispatching the resulting penalty to put the visitors ahead.

City held firm until the interval with Marko Marosi making a string of fine saves before Armstrong doubled Blackburn’s lead when he rifled an effort in off the crossbar.

Rovers scored a third goal when Harvey Elliott finished coolly from close range before Sam Gallagher added a late fourth goal finding the bottom corner from 12-yards out on a difficult afternoon for the Sky Blues. 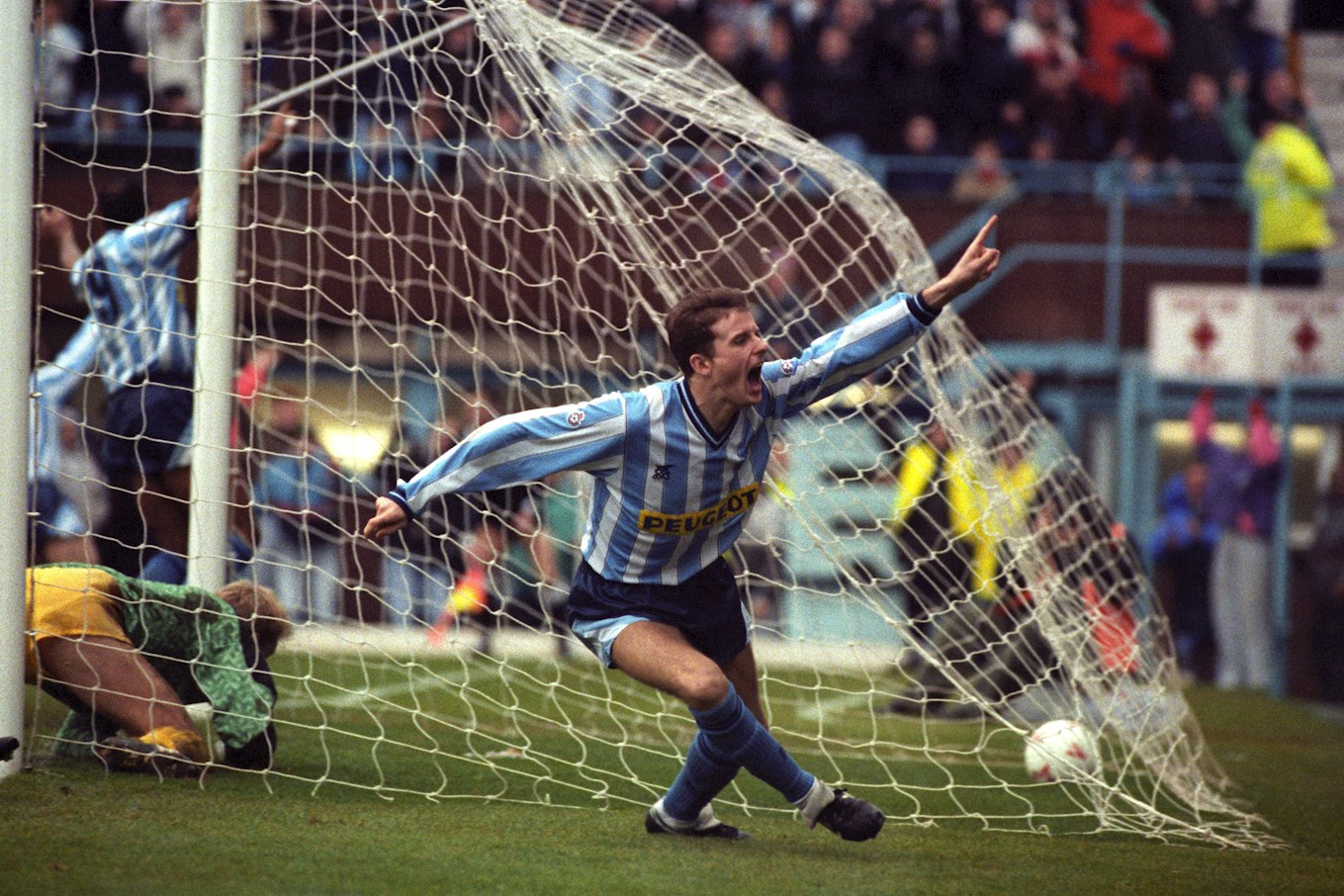 Former Scotland international Kevin Gallacher made over 100 appearances for both clubs during the peak of his career.

Gallacher began his career in his native Scotland with Dundee United and helped the Terrors reach the 1987 UEFA Cup final, memorably scoring against Barcelona in the quarter-finals, eventually losing to Swedish side IFK Goteborg on aggregate.

He also scored his side’s goal in the 1988 Scottish Cup final defeat against Celtic, going on to make over 150 appearances for the club over the course of five seasons.

The forward joined City in January 1990 and proved a popular signing with the Sky Blues faithful making 117 appearances and scoring 35 goals during his three seasons at Highfield Road.

He moved to Blackburn in March 1993 and suffered two broken leg injuries which restricted him to just a single appearance during Rovers Premier League title winning season.

Upon returning to full fitness he became a key player at Ewood Park and made over 150 appearances for the club scoring more than half a century of goals before joining Newcastle United.

He spent two seasons with the Magpies before finishing his career with short spells at Preston North End, Sheffield Wednesday and Huddersfield Town respectively, whilst also earning 53 caps for Scotland and playing at the 1998 FIFA World Cup. 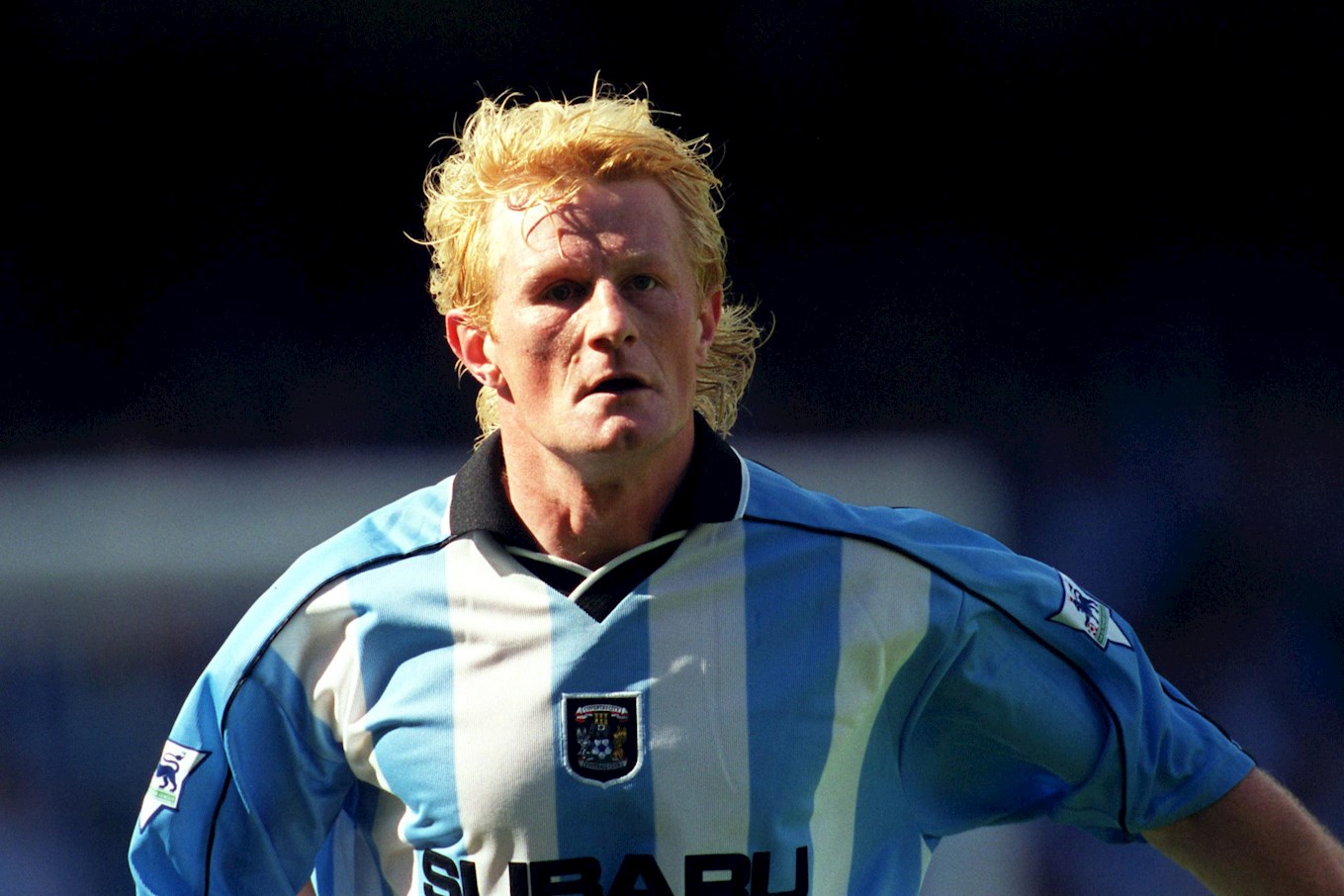 Blackburn legend Colin Hendry won the Premier League with Rovers before playing for the Sky Blues later in his career.

Hendry started his professional career with Dundee playing as a striker before being converted into a defender following his move to Blackburn in 1987.

He scored the winning goal for Rovers in the 1987 Full Members Cup final, defeating Charlton Athletic at Wembley, and made over 100 appearances for the club during his first spell at Ewood Park.

The defender joined Manchester City in 1989 winning the club’s Player of the Year award before re-signing for Blackburn in November 1991.

Hendry helped Blackburn win promotion from the Second Division under the management of Kenny Dalglish before winning the Premier League title in 1994/95 and was named in the PFA Team of the Year for his efforts that season.

He amassed over 250 appearances for the Lancashire club during his second spell at Ewood Park which lasted seven seasons before returning to Scotland with Rangers in 1998.

The centre-back won the domestic treble with the Gers in his first season at Ibrox before moving to the Sky Blues in February 2000.

He made just 11 appearances for City over the next two seasons and was loaned to Bolton Wanderers before making the move permanent in 2001.

Loan spells with Preston North End and Blackpool would follow for the 51-cap Scotland international who also captained his country at the 1998 FIFA World Cup. 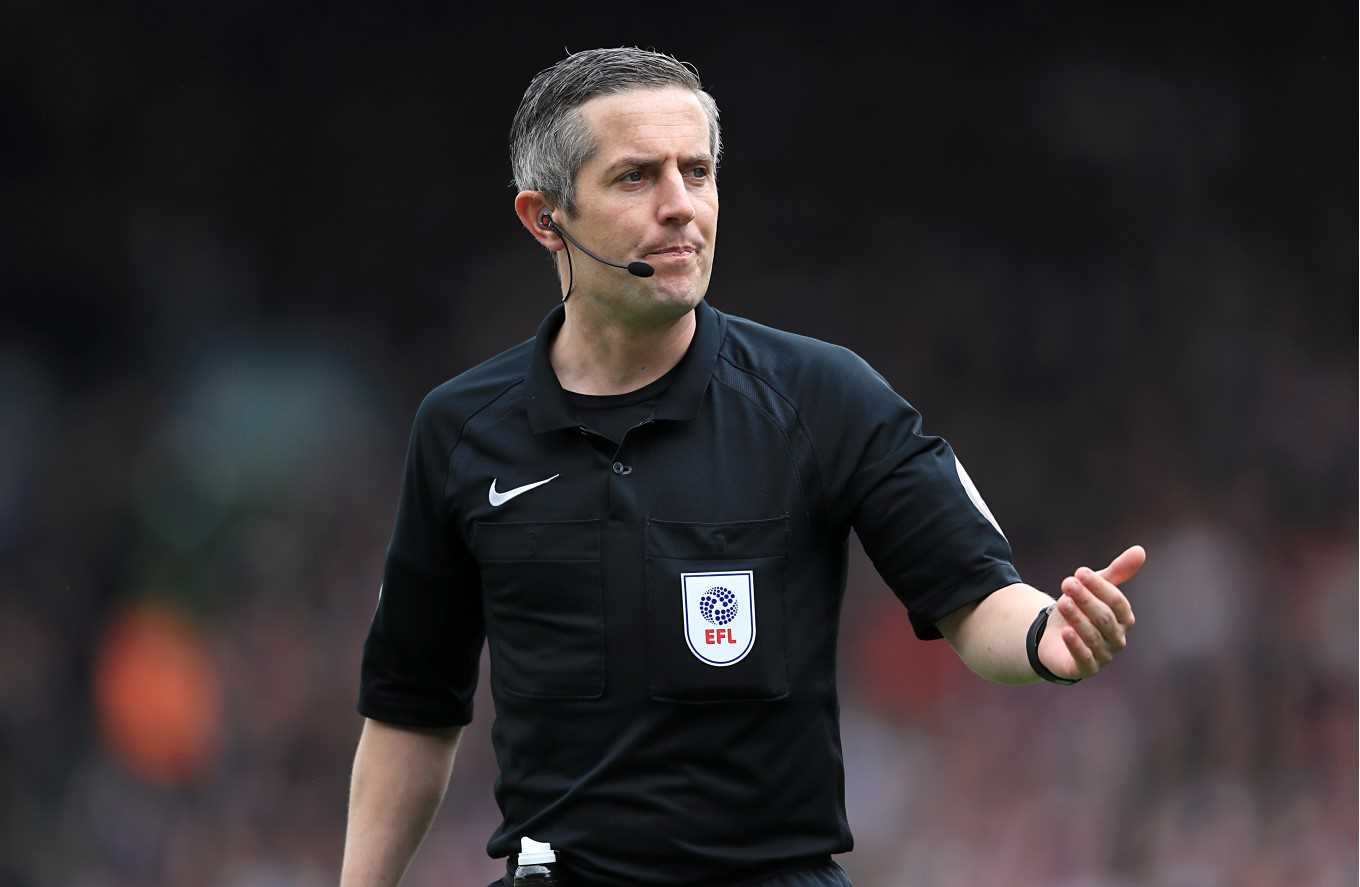 Darren Bond will be the man in the middle on Saturday afternoon, taking charge of his 23rd game of the 2020/21 season.

He last refereed the Sky Blues back in February 2020 when City played out a 2-2 draw with Birmingham City at St Andrew’s, eventually bowing out on penalties, in an Emirates FA Cup fourth round replay.

This will be Bond’s ninth season as a Football League referee and he has officiated the Sky Blues on four previous occasions, with City winning one and losing three of those matches.

So far, Bond has awarded 75 yellow cards and two red cards across 22 matches in the Championship, League One, Emirates FA Cup and Carabao Cup.

He will be assisted by Paul Hodskinson and George Byrne with Jeremy Simpson acting as fourth official.

The Sky Blues secured a hard fought point against Blackburn Rovers at Ewood Park on Saturday afternoon despite finishing the game with 10-men.

Ben Brereton fired Rovers ahead midway through the first-half before Matty James scored his first goal for the club with a well-taken finish, five minutes after the interval, to secure a point for Mark Robins side.

City held on in the final few minutes after Leo Ostigard was dismissed for receiving two yellow cards with the Sky Blues next in action against Middlesbrough this coming midweek.

Robins made three changes from the side beaten by Swansea City in midweek with Fankaty Dabo starting for the first time since January and Matty James and Jordan Shipley coming into midfield.

The Sky Blues made a lively start when Sam McCallum’s cross from the left hit the crossbar inside the first minute and bounced away to safety with Rovers keeper Thomas Kaminski at full stretch.

Some space then opened up for McCallum on the edge of the visitors penalty area, firing a low effort wide of the target.

City continued to dominate the early exchanges at Ewood Park when Tyler Walker knocked the ball into the path of Shipley who couldn’t keep his half-volley down, shooting a few yards over the crossbar.

Rovers created their first real opening when Harvey Elliott attempted to square the ball to Brereton at the back post only for Ostigard to make a crucial interception.

Blackburn took the lead on 27 minutes when City failed to clear Ryan Nyambe’s ball across the penalty area with Brereton on-hand to finish past Ben Wilson from the edge of the penalty area to put the hosts ahead.

City had the ball in the net just past the half hour mark when Walker flicked on McCallum’s cross into the box into the path of Ostigard who finished well at the back post, only for the assistant referee’s flag to rule the goal out for offside.

The home side hit the woodwork in the final few minutes of the half when Barry Douglas’s dangerous free-kick from the right came back off the left-hand post.

Rovers almost doubled their lead right on the stroke of half-time when Elliott played Adam Armstrong through with Wilson quick off his line to meet the striker and parry his effort behind for a corner.

The Sky Blues made a similarly quick start to the second period and equalised on 50 minutes when Walked flicked a header into the path of James who lifted an effort into the left corner of the goal to draw City level.

Robins made a triple change with just over 20 minutes left to play as Josh Pask, Hamer and O’Hare were introduced from the bench in place of Dabo, James and Shipley.

In a half of few chances, Jarrad Branthwaite headed wide from a corner from the right for the hosts as both teams struggled to create any clear-cut openings since City’s leveller.

Moments after Viktor Gyokeres went through for City, Ostigard was shown a second yellow card for a foul on Armstrong as the forward tried to break up-field, meaning the Sky Blues would play the final seven minutes with 10-men. 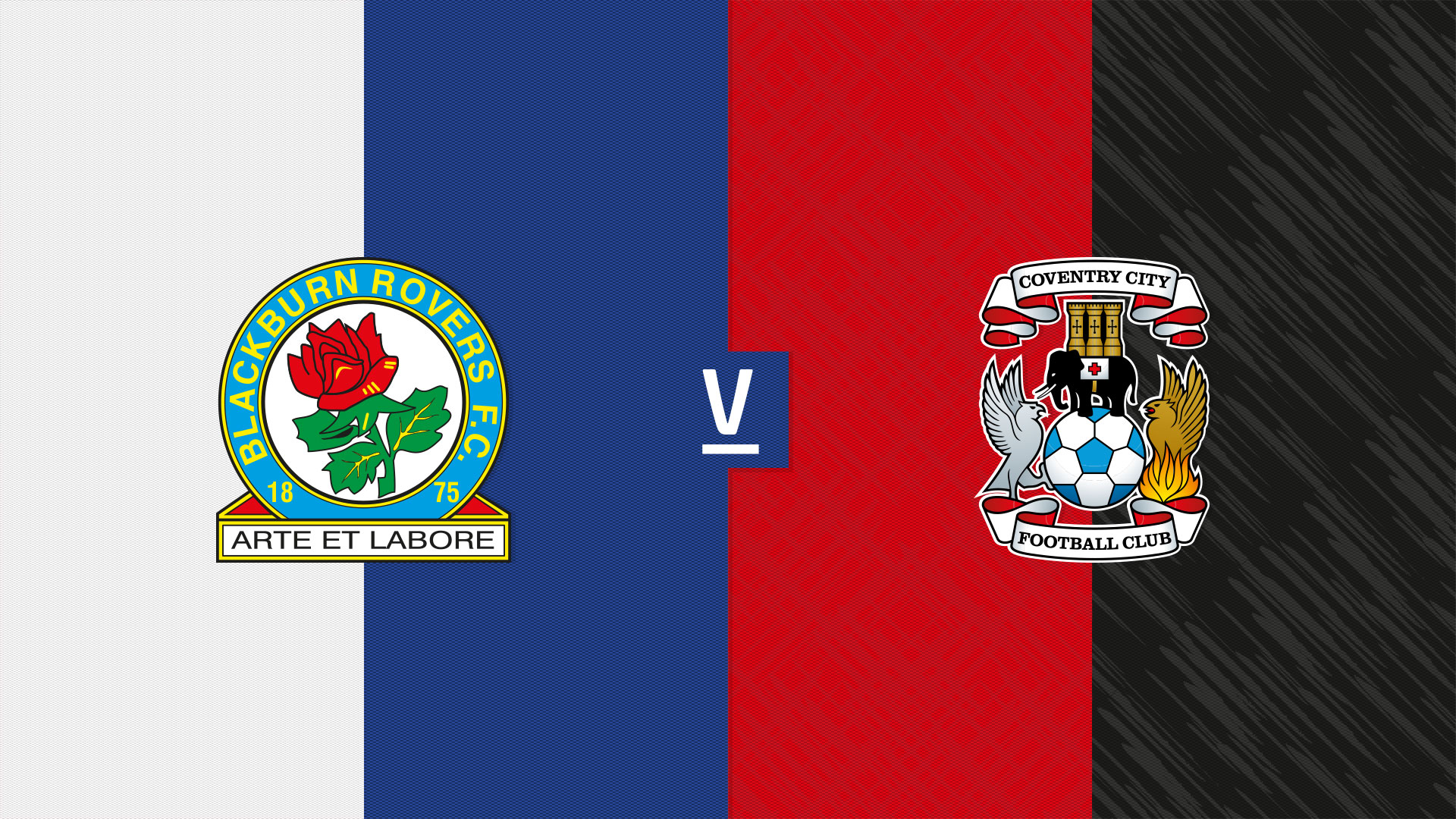 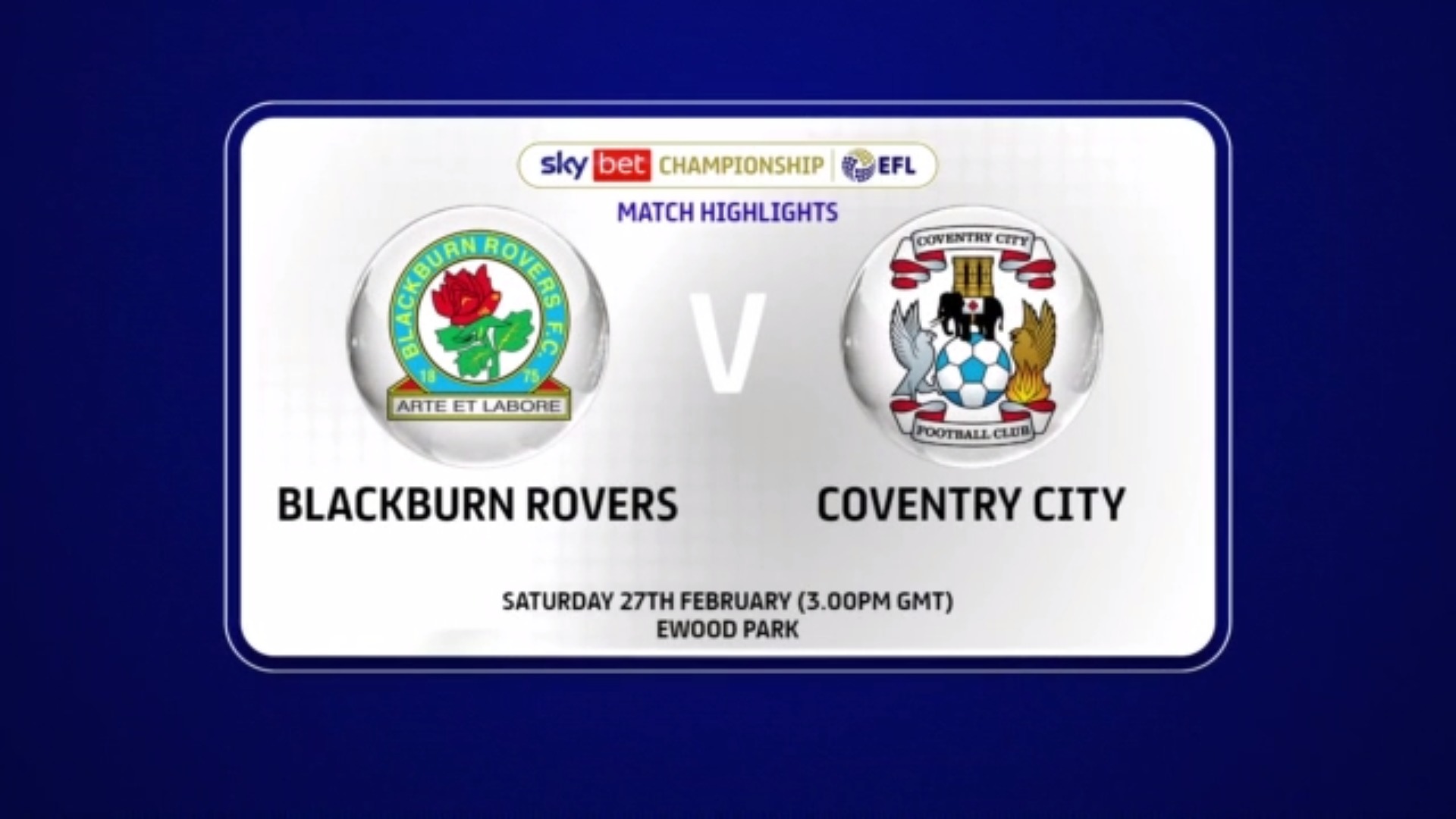 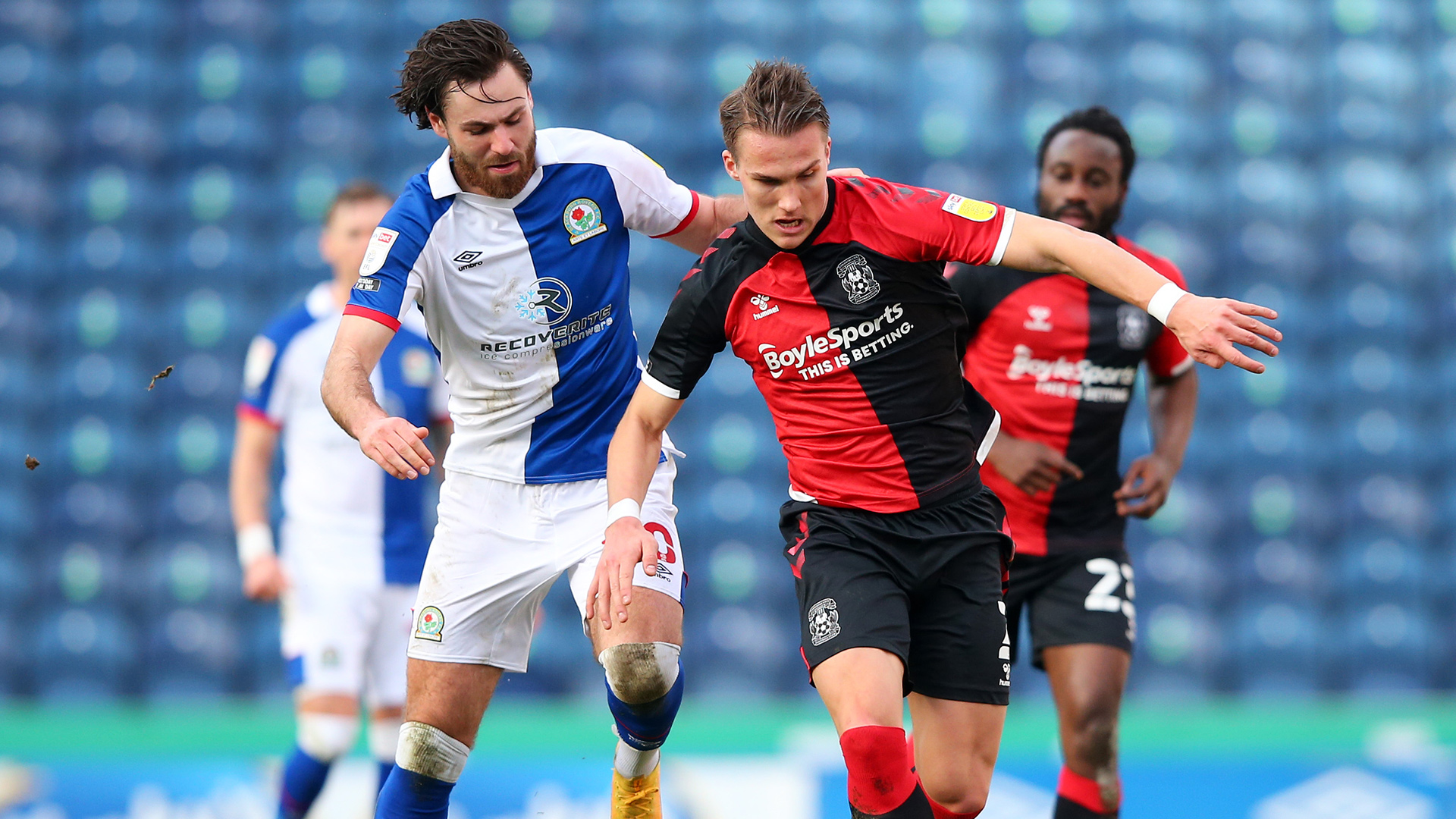