The Sky Blues take on Tranmere Rovers, looking to avenge their defeat to Rovers back in October. Here’s everything you need to know about our opponents.

Tranmere currently occupy 20th position in Sky Bet League One, sitting outside of the relegation zone on goals scored, but have a game in hand on the side below them.

Rovers edged out the Sky Blues when the two sides met in front of the Sky cameras back in October but have only won twice more since then. They’ve scored 26 and conceded 39 goals in their 22 matches and have won just once in their last seven league outings.

Tranmere’s squad has plenty of firepower, with forwards Morgan Ferrier, Rushian Hepburn-Murphy and Stefan Payne all on four league goals. They also have plenty of threat from midfield with Connor Jennings and Ollie Banks on three league goals each, whilst towering defender Manny Monthe has chipped in with four assists. 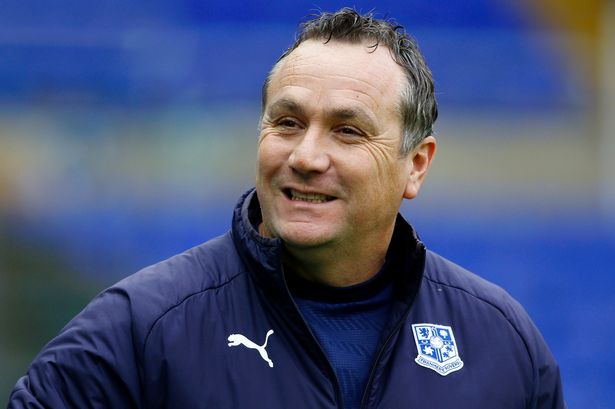 Micky Mellon made over 150 appearances during his playing career for Tranmere before later taking charge of the Whites as manager in 2016.

His first managerial stint was with Fleetwood Town from 2008-2012 and led the club into the Football League, for the first time in their history, during his four-year spell at the club.

He earned promotion via the play-offs from the National League North in 2009/10, having been bottom of the table when he took over in September of the previous campaign.

Two seasons later in 2011/12, having lost to AFC Wimbledon in the play-offs in their first season in the National League, Mellon guided Fleetwood into the Football League after attaining 103 points in a remarkable season for the club.

He departed the club in December 2012 with Fleetwood fourth in League Two, a remarkable turnaround in fortunes for The Cod Army given where they were when Mellon took over in September 2008.

Mellon returned to the dugout in May 2014 when he was appointed as the new manager of Shrewsbury Town who had just been relegated to League Two.

The 47-year-old earned promotion back to the third tier at the very first attempt, finishing as runners-up to Burton Albion, before then keeping them in the division the following season.

He departed New Meadow in October 2016 to take the reigns at National League side Tranmere and has enjoyed huge success with the Merseyside club.

The Scot has won back-to-back promotions in his two full seasons at the helm, both via the play-offs, meaning he has achieved promotion five times as a manager. 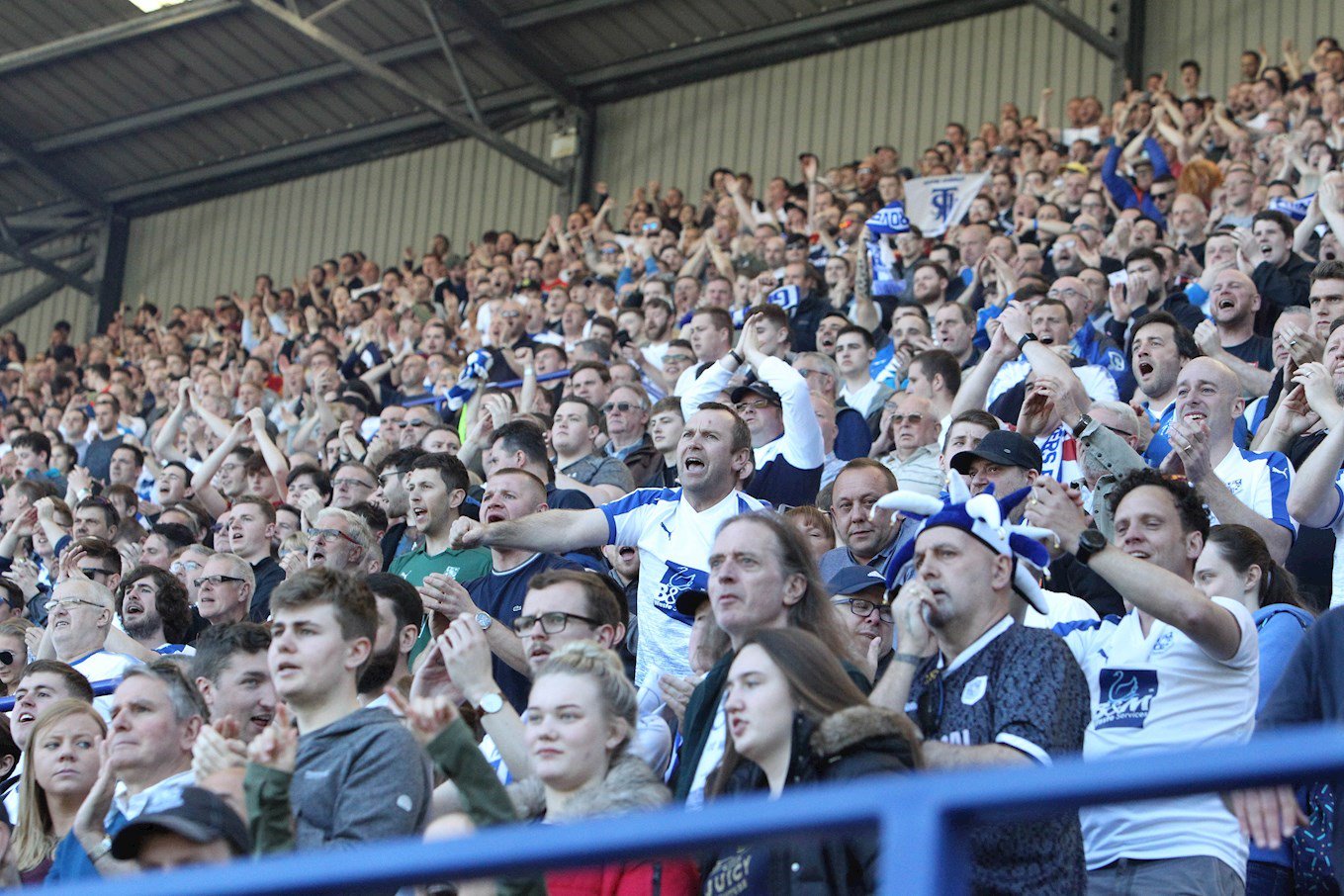 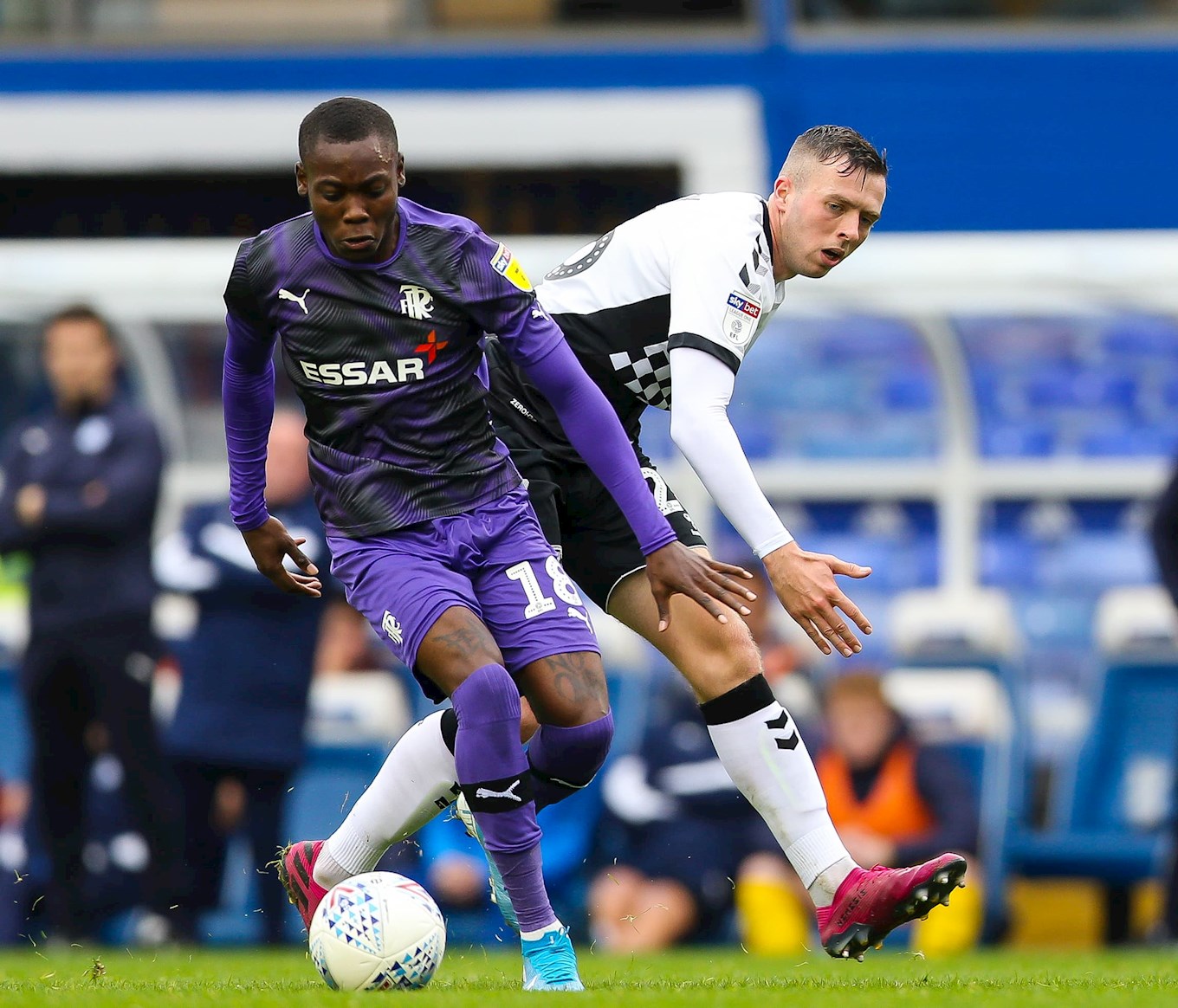 The two sides last met back in October with Tranmere edging out the Sky Blues 1-0 at St Andrew’s, in a game played in front of the Sky Sports cameras.

City started on the front foot with Liam Walsh chipping a delicate ball through to Jordy Hiwula with the forward’s volley landing on the roof of the net.

The Sky Blues were then unfortunate not to win a penalty when Walsh’s whipped cross appeared to strike the arm of a Tranmere defender inside the penalty area, but referee Darren Drysdale was unmoved.

City’s dominance continued into the second half when Zain Westbrooke’s quick feet set-up Matty Godden for a chance only for the striker to fire his effort over the crossbar.

Jordan Shipley then slipped Godden in for another chance minutes later, with the striker curling his effort past the goalkeeper and onto the post before bouncing to safety. 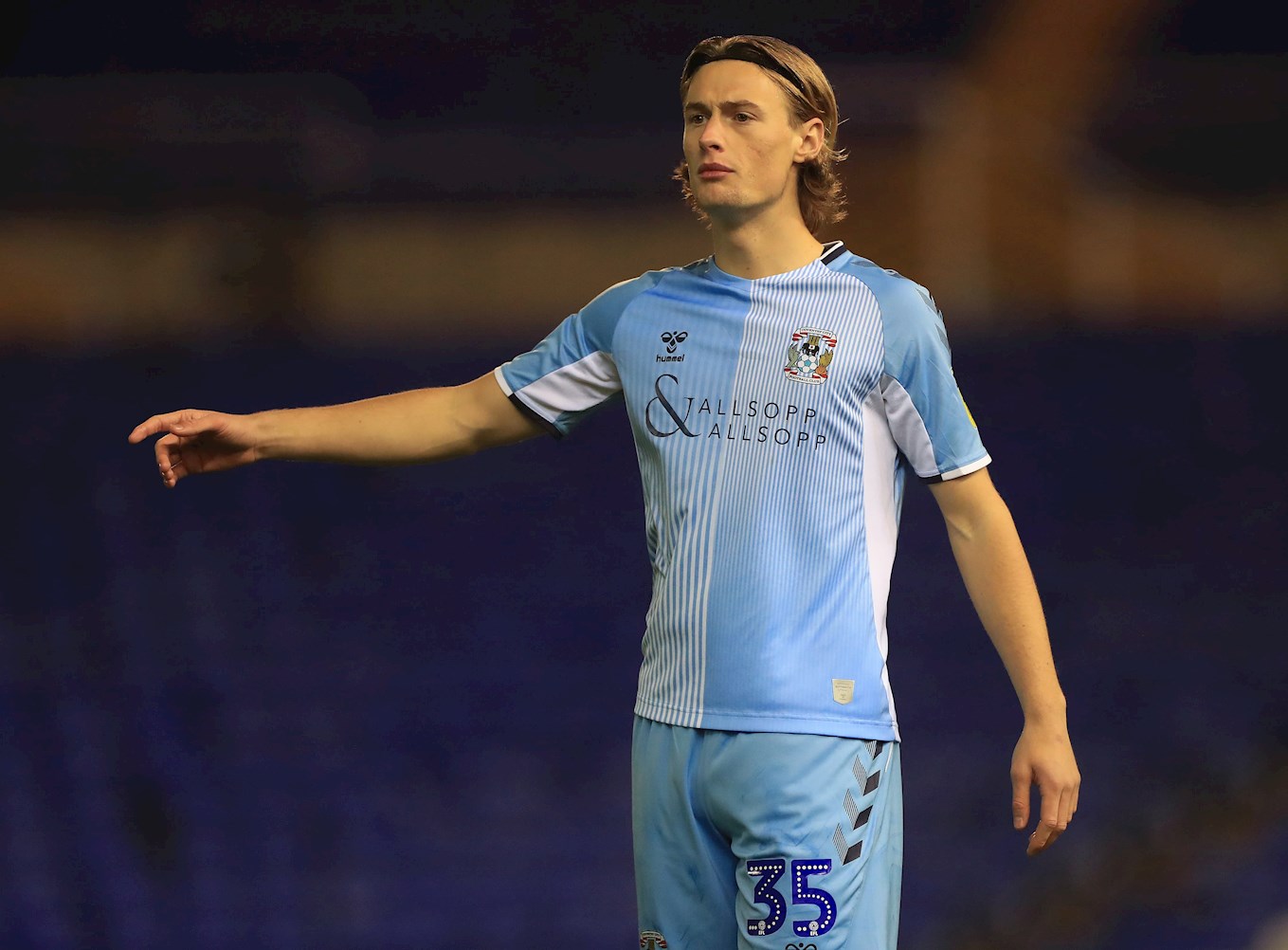 Drysdale made two appearance for Rovers, making his debut as a 17-year-old in the National League, having also featured in the club’s promotion winning season to League Two in 2017/18.

The centre-back made his Sky Blues debut against Southampton u23s in the Leasing.com Trophy in November before then making his league debut when he started in the 2-1 win against Rochdale later that month. 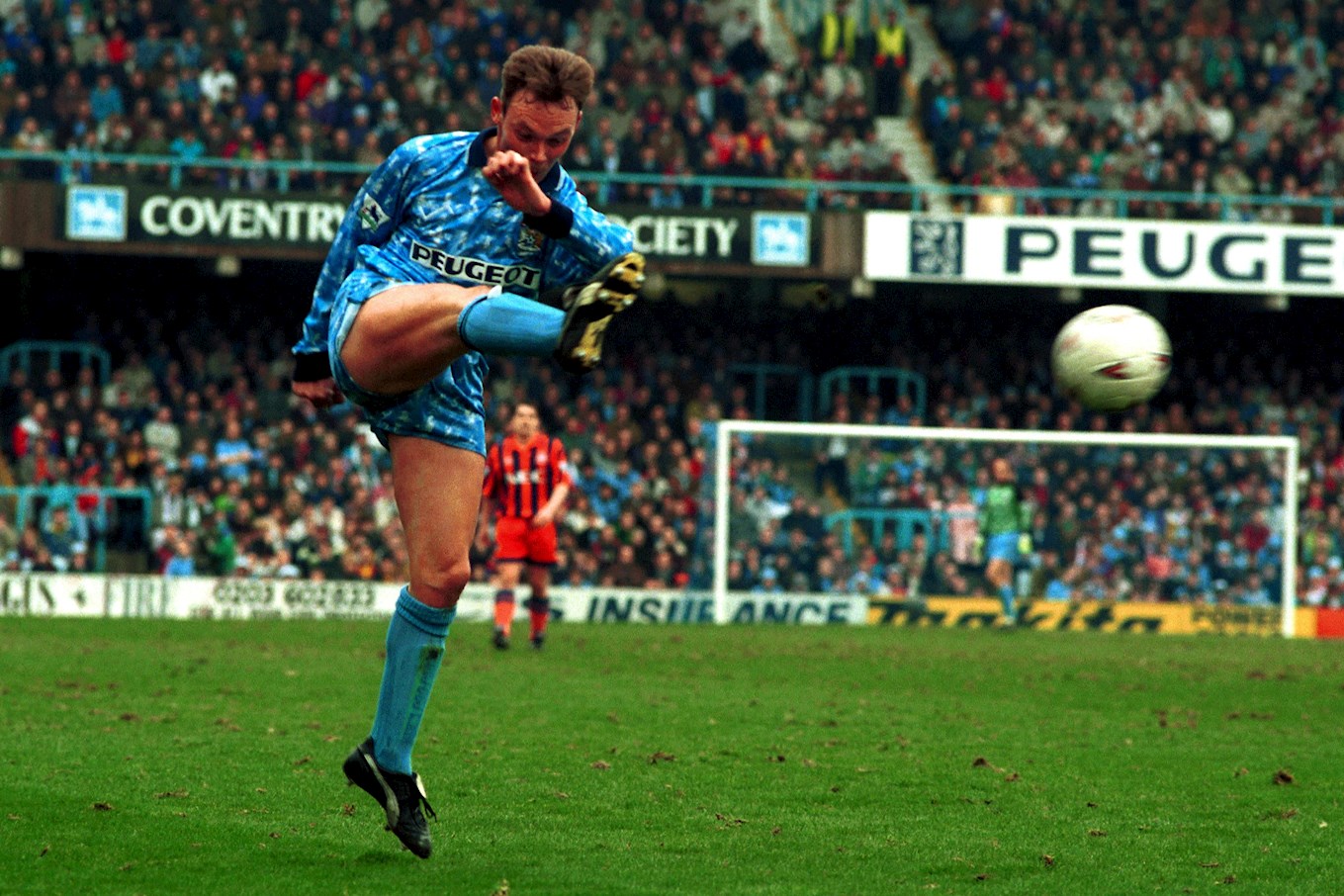 Birmingham born midfielder Sean Flynn began his professional career with the Sky Blues before enjoying in a two-year spell with Tranmere later in his career.

Flynn arrived at City from Halesowen Town in December 1991 and would go on to make over 100 appearances for the club, the majority of which came in the top-flight over a four-season spell.

After falling out of favour under then newly-appointed Sky Blues boss Ron Atkinson, Flynn joined Derby County and helped the club win promotion to the Premier League in his first season with the East Midlands side.

He would spend time on loan at Stoke City the following season, before joining boyhood club West Bromwich Albion in August 1997. Flynn made over 100 appearances for the Baggies, scoring 10 goals.

Flynn completed a free transfer switch to Tranmere in July 2000 and made 82 appearances for the club, scoring 11 times, during his two seasons at Prenton Park.

He spent the next couple of seasons with Kidderminster Harriers before finishing his career with a host of non-league clubs and then retiring in 2012. 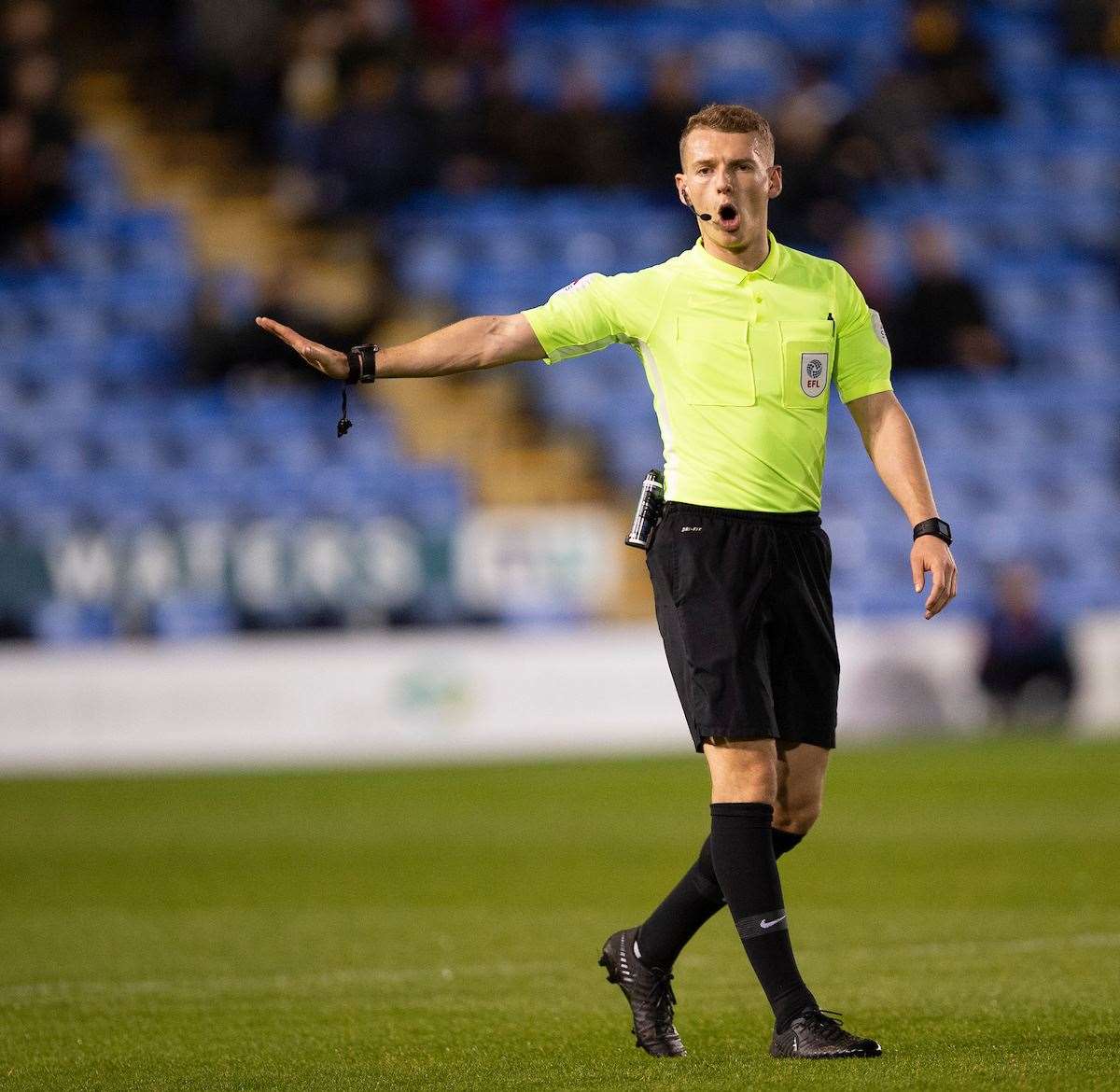 Will Finnie will be the man in the middle on Wednesday afternoon, taking charge of his 22nd game of the season.

In the 21 matches he has officiated in this season, Finnie has so far produced 79 yellow cards and two red cards.

This is Finnie’s first season as an EFL referee, having been promoted from the National League last season.

He will be assisted by Joe Simpson and Peter Gooch with Lewis Smith acting as fourth official.

Another hat-trick from Matty Godden and a goal from Jordan Shipley handed the Sky Blues the perfect start to the new year as they claimed back-to-back away wins in Sky Bet League One with a dominant victory against Tranmere Rovers.

Godden opened the scoring inside five minutes with a well-taken header before Shipley doubled the lead with a composed finish on 17 minutes.

Connor Jennings pulled a goal back for Rovers before the interval before Godden wrapped up the points when he finished off a fine move in the second half.

The striker then completed his hat-trick from the penalty spot in injury time which means he has scored hat-trick’s in his last two league outings after last week’s treble away at Wycombe Wanderers.

The win moves Mark Robins’ side up to third in the table and sees them claim three league wins on the bounce for the first time this season.

The Sky Blues started the game on the front foot with Liam Kelly testing Tranmere keeper Aaron Chapman with a 30-yard drive in the opening minutes.

That quick start soon led to a goal when Liam Walsh produced a delightful cross for the run of Godden who headed past Chapman after just four minutes to hand City the lead.

City continued to dominate proceedings in the opening exchanges and were unlucky not to double their lead when Fankaty Dabo’s low cross from the right was turned over the bar by Zain Westbrooke from inside the penalty area.

Sam McCallum was next to try his luck when he picked up a loose ball and charged up-field with his effort from outside of the penalty area going inches past the post.

Dabo continued to cause the hosts problems down the right-hand side when he produced another excellent ball, this time for Shipley, with the midfielder firing his effort straight at Chapman.

In a superb opening 20 minutes from Mark Robins’ side, the Sky Blues grabbed a second goal when Kelly lifted a superb ball into the path of Shipley who composed himself before finding the bottom corner to double City’s advantage.

City searched for a third goal on the half-hour mark with Godden heading over the bar from Westbrooke’s whipped corner from the left.

Tranmere pulled a goal back with their first real threatening attack of the game when Kieron Morris played the ball into the path of Jennings who finished well beyond Marko Marosi into the right-hand corner of the goal.

Just before half time, Shipley tried his luck from a free-kick 20-yards from goal, but saw his effort go over the crossbar as City headed into the break with a one-goal advantage.

Tranmere created the first chance of the second half when Jennings was denied his second of the afternoon by Marosi who made a fine save from close range before Dabo cleared the loose ball off the line.

Marosi then made a stunning save to deny Morris’s powerful drive, acrobatically tipping his effort over the crossbar.

After a period of heavy pressure, Dabo was penalised for a shove on George Ray inside the penalty area only for Morgan Ferrier to blaze the resulting spot kick well over the crossbar.

The Sky Blues responded with a chance of their own just shy of the hour mark when Kyle McFadzean connected well with Walsh’s floated corner from the right, but his header was well held by Chapman.

City then came agonisingly close to adding a third when Godden beat the offside trap before skimming the crossbar with his effort around 20-yards from goal.

Eventually, the Sky Blues did find a third goal with substitutes Amadou Bakayoko and Callum O’Hare combining, minutes after entering the fray, before the latter slipped in Godden who finished clinically into the bottom left corner.

O’Hare tormented the Tranmere defence once again when he played a one-two with Walsh, only for the latter’s goal bound effort to be deflected behind for a corner.

The substitute was in the thick of the action again in injury-time when he was felled inside the penalty area by Sid Nelson, allowing Godden to coolly slot home the resulting penalty and complete his hat-trick for the second consecutive league fixture.