The Sky Blues welcome Port Vale to the Ricoh Arena as Coventry look to get back to winning ways in SkyBet League Two.

Last weekend’s goalless draw with Chesterfield at the Proact helped City add another point to their early-season total after defeats against Yeovil and Newport.

The visitors have lost five on the bounce in all competitions this season and have failed to earn themselves a single point since opening day’s 3-1 victory over Crawley.

Valiant’s boss Michael Brown may have kept his job over the summer, but the 40-year-old failed in his task of dragging his side from the inevitable drop down to League Two last season, winning just six of his first 31 games since taking charge on Boxing Day.

Manchester United academy graduate Danny Pugh will be a familiar name to Sky Blue fans on Saturday. The left-back made five appearances for City in 2015 after joining on a free from Leeds United but had his career in the West Midlands halted by an ankle injury.

Tom Pope, Michael Tongue and Anthony Kay provide Vale with spine rich with Football League experience. Despite failing to find the net this term Pope scored 69 times during his first spell in Staffordshire and will be one to keep an eye on.

Winger, Christian Montano was described by Michael Brown as the man signed to feed ‘the Pope’ and is certainly a treat for the Sky Blues. The Colombian gives Vale pace on the counter and a delivery strong enough to give Pope chances in the air.

The Sky Blues completed the double over Port Vale last season with a 2-1 win at the Ricoh Arena in what was Mark Robins’ first victory after returning as Coventry City boss.

Kyel Reid gave the Sky Blues the lead late on in the first half with a stinging 35-yard volley that dipped over Deniz Mehmet before some sensational improvisation from Kwame Thomas doubled City’s advantage just five minutes later when he backheeled his rebound into the bottom corner.

Nathan Smith did grab a goal back for the visitors but it was not enough for Vale to take anything from the game.

Coventry City have beaten Port Vale 1-0 at the Ricoh Arena thanks to a first half curler from Jodi Jones.

Coventry City have beaten Port Vale 1-0 at the Ricoh Arena thanks to a first half curler from Jodi Jones.

Man of the Match, Jones took his tally to four for the season as City bounced back from recent defeats to earn a much needed win.

The victory however ended in controversial fashion when Rod McDonald was handed a straight red card for his challenge on David Worrall, but the Sky Blues managed to keep their lead right to the whistle.

The afternoon started slowly, but the Sky Blues were able to capitalise on their first real chance of the game. The breakthrough came after 25 minutes. Jones combined well with Michael Doyle down the right before being allowed the time to cut inside and curl a dream effort in off the far post. City had the lead.

Jack Grimmer has already found the net once this season from right-back and nearly doubled his season tally on the half hour mark. The former Fulham defender’s cross caught Rob Lainton off guard and almost sailed into the far top corner.

Mark Robins’ side started the second half with a little more bite. Lee Burge’s pin-point long ball found Stuart Beavon deep in the opposition half who set-up Liam Kelly with a chance to fire one from range but his effort sailed past the far post.

The early chance injected some life into City’s play. Next it was Beavon’s turn to test Lainton with Tony Andreu making the most of a loose ball on the edge of the area but the Vale ‘Keeper got down well to collect.

Doyle found himself at the heart of nearly everything the Sky Blues produced over the afternoon and it was his ball that gave Beavon a golden chance to make it two. The 33-year-old chased down his captain’s pass and flicked the ball over Lainton but the ball rolled agonisingly past the far post.

However, with ten minutes to go the game took a turn. Rod McDonald was deemed to have denied David Worrall a clear goal scoring opportunity and was given a straight red card, leaving City with ten men for the final stages and allowing Vale back into the game.

Burge, who had enjoyed a quiet afternoon, was called upon twice in the final moments through efforts from Tom Pope and Marcus Harness but the ‘keeper stood strong to keep his clean sheet.

Coventry City face Port Vale on Saturday as we return to League Two action at the Ricoh - and you can save money on your tickets when you buy in advance...

Kick-off is at 3pm at the Ricoh Arena, as Mark Robins' side look to build on the goalless draw against Chesterfield at the Proact and return to winning ways.

Tickets are available on the day, as well as in advance.

Come along and get behind your team! 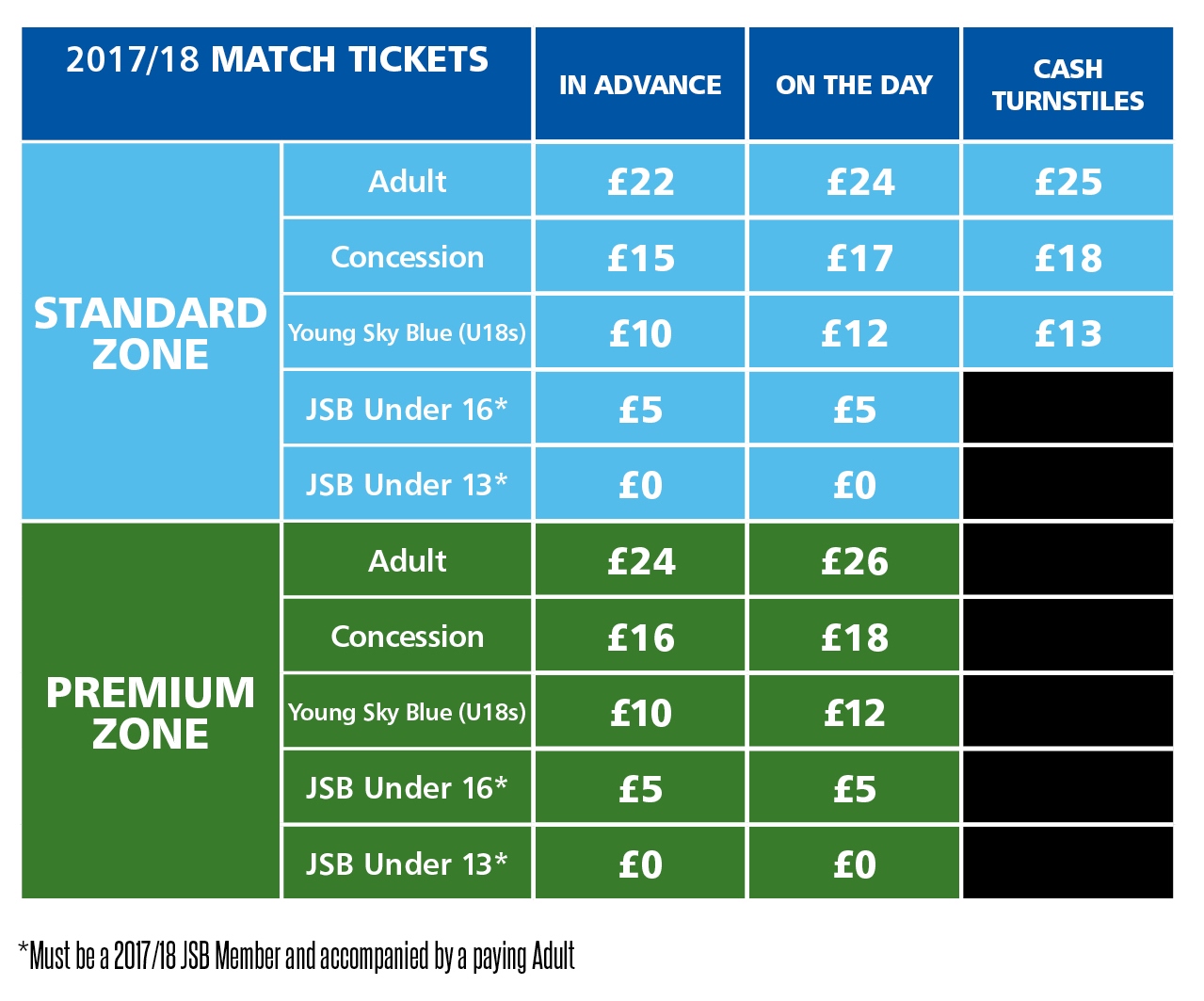 BUY IN ADVANCE – and save money!

Please note tickets are no longer available at the Club Shop at Arena Shopping Park.

BUY ON THE DAY:

Please note a £1 Ticketmaster processing fee applies to tickets purchased across all channels, excluding cash turnstiles where this is included as standard.

Want to save money when watching the Sky Blues? Season Tickets are the best value way to watch all 22 remaining home league games, while 6 and 12 Match Packages can save you money even if you can’t commit to all games.

Click here to look at our 6 and 12 Match Package options.