The Sky Blues head to Sincil Bank to face Lincoln City in SkyBet League Two as City look to bounce back from last week's defeat to Mansfield Town.

Lincoln have only lost one of their last five games, and welcome Mark Robbins' side on the back of win over Crewe Alexandra (1-4) and Notts County (2-1).

Dan Cowley, alongside his brother Nicky, only took charge at Sincil Bank last year, but have already catapulted themselves into Lincoln Legend. The duo achieving promotion back to the Football League along with an incredible run in last season's FA Cup which saw them beat Premier League Burnley before being knocked-out by Arsenal at the Emirates.

The Imps do not have any strong injury concerns ahead of the clash but manager Dan Cowley is monitoring the fitness of Harry Anderson and Michael Bostwick who both face late fitness tests.

The Sky Blues will have to check on Jack Grimmer, who came off against Mansfield with concussion, but elsewhere have no new injury concerns, with Tony Andreu the only man out, but do have three players currently on four yellow cards (Duckens Nazon, Rod McDonald and Michael Doyle) meaning one more at Sincil Bank would lead to a suspension.

Billy Knott could be key for the Imps at Sincil Bank. The Former Chelsea Academy star joined Lincoln in the summer after successful loan-spell and the midfielder suits his sides high-intensity style of play.

In attack, former Birmingham City striker Matt Green started his career in non-league with Newport County before attracting the attention of Cardiff City. Green scored 26 goals in 83 games for Mansfield Town over the last two season's before joining Lincoln in the summer n a two-year deal.

Coventry born Josh Ginnelly could also feature. The 20-year-old, on-loan from Burnley, had spells at Walsall and Altrincham before joining Lincoln where he is slowly becoming a regular, scoring his first goal for the club during their opening day draw with Wycombe.

Goals from Jodi Jones and Duckens Nazon gave the Sky Blues all three points after a brilliant second half turnaround at Sincil Bank.

Imps' striker Matt Rhead gave the home side the lead at the break but a stunning solo goal from Jones and a close range finish from Nazon gave City their second away win on the bounce.

Going into this one, the two sides boasted the strongest two defensive records in the division, and it certainly looked that way fromt the start.

Twice the Sky Blues came close to testing Josh Vickers in the Lincoln goal. Marc McNulty has more time than he first though when he fires a tame effort straight down the 'keepers throat from 25-yards, before Max Biamou's delicate flick-on almost found the former Sheffield United man in space again but instead it floated agonsingly over his his head.

The home side too had chances in the opening half-hour, mostly from set pieces. Sean Raggett's header forced a strong save from Lee Burge before Rod McDonald was able to scramble the ball out of safety.

Matt Rhead had only scored once this season, but doubled his season tally midway through the second half. Alex Woodyard made the most of a weak Sky Blues clearance and played a pin-point ball across the face of goal for Rhead to tap home. Lincoln ahd the lead.

Mark Robins' side looked for an instant responce. Jordan Shipley stung the gloves of Vickers from range before some tidy link-up play almost saw him in on goal but for Michael Bostwick.

Lincoln always looked dangerous from set-pieces, but the Sky Blues almost found themselves level when a deep corner fell to McDonald at the far post but his volley was palmed away well by Vickers again, adding to his growing number of saves.

Just five minutes into the second half and Duckens Nazon entered the frame to repace McNulty, and came close to making an instant impact as he beat him man in the area and fires a thunderous effort towards the far corner, but yet again Lincoln's 'keeper pushed it behind.

As the game entered the final half hour it was becoming clear that it would take something pretty special to beat Vickers. Step up Jodi Jones. The 20-year-old twisted and turned his way to the corner of the Lincoln area before rocketing his shot low into the far corner to silence the home fans. The Sky Blues were level, and were not done yet.

Jones was now being booed by the packed home granstand to the right of the Sky Blue Army, but still skipped two challenges with ease to charge into the area just moments later. Vickers parried his first effort back to him and his second onto the crossbar which fell perfectly for Nazon to blast the ball past everyone in the goalmouth and give City a valuable lead, and all three points at a sell-out Sincil Bank.

We can confirm that we have been given an extra 442 tickets for the trip to Sincil Bank to face Lincoln City in SkyBet League Two action. 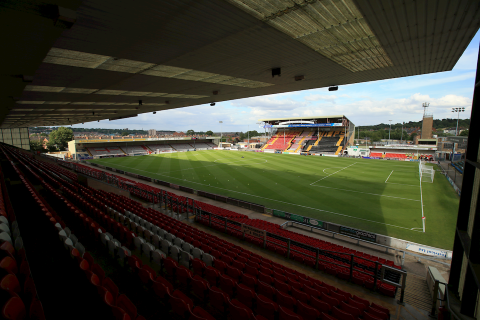 The original allocation of 1,017 had sold out as of Friday 3rd of November, just a day after they had originally gone on priority sale.

Therefore, following a request to The Imps, we now have an extra 442 tickets, which will be going on sale on Thursday the 9th of November at 9am - both from the Ticket Office* & online/call-centre.

*The Ticket Office will be open early to accomodate this.